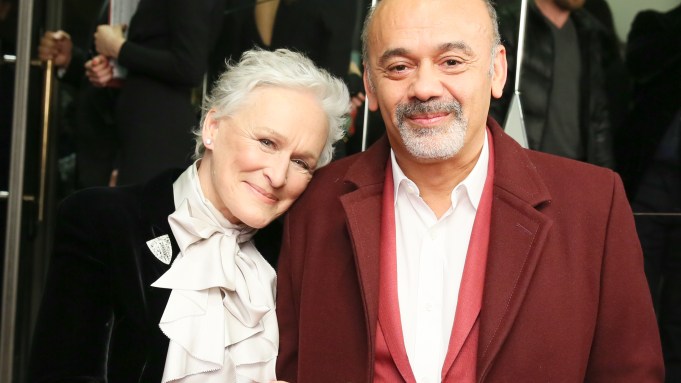 “If you look at the clothes you see one with a turban, which was the inspiration [for the shoe],” explained Louboutin as he floated past costumes from the Tony award-winning musical on display in his Manhattan flagship. “Turbans should come back — I would be the first one to put the turban on,” he added with a laugh.

Earlier this month Close revived her role as the faded silent film star with a limited Broadway engagement. “I’ve learned that I’m physically strong with this role,” noted the 69-year-old Tony winner. “All of your creative muscles are being flexed — every single one of them.”

But don’t expect to find the actress wearing any of her character’s bejeweled, leopard print, fur-trimmed outfits when not onstage, describing her own wardrobe as “simple, classic, unadorned.”

Sipping Champagne and nibbling filet mignon crostino, many guests eagerly purchased a pair (or two) of red-soled heels in support of Close’s nonprofit BC2M, which aims to end the stigma surrounding mental illness.

Comedian Tracy Morgan and wife Megan Wollover were on hand to celebrate, noting a favorite leisure activity is “having lunch and stopping by Christian Louboutin” for jewel-encrusted sneakers. Describing his wife’s style, the SNL alum joked: “She was dressed good enough for me to want it, so I went and got it!”

Close addressed the crowded room with a touching speech in which she remarked that allowing those with mental illness to be part of society is “the greatest human rights issue now in the world.”

Amid applause, Louboutin embraced the thespian, but noted the glittering evening had come to an end: “You have to protect your voice, so now we must send her to bed,” he explained.