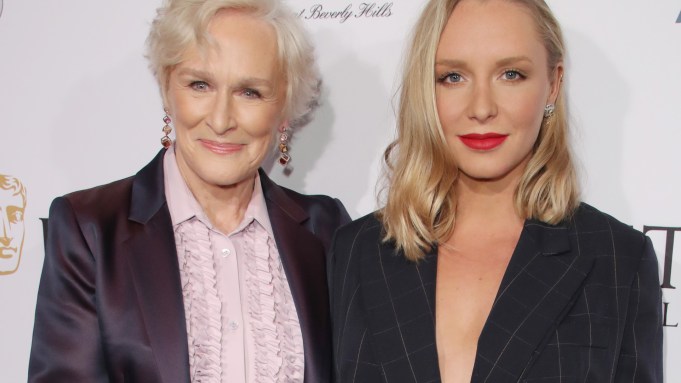 LOS ANGELES — Although the British brought posh accents, tea and petite uncrusted sandwiches for their annual BAFTA tea party, the atmosphere felt relaxed and swathed in a kindred spirit.

“What’s up brother?” Adam Driver said while pulling John David Washington in with a handshake.

While the co-stars of the four-time Golden Globe-nominated film “BlacKkKlansman” were just one facet of the ease that manifested around the grounds of the Four Seasons Hotel Los Angeles at Beverly Hills, most guests also made it an afternoon for quality time and support.

Take Isla Fisher, who was all about her nominated husband Sacha Baron Cohen, for example. “I’m really happy to be here to celebrate my husband,” she said while graciously avoiding questions about herself.

Or Glenn Close who lauded her daughter and co-star of “The Wife” Annie Starke. “[She] is a much wiser person than I am,” Close said. “She’s been out there pounding the pavement like everyone else and, some days, I think at a disadvantage because I’m her mom. Hopefully, she’ll have a wonderful role to prove to people and herself how truly gifted she is.”

A few moments later, and before getting a kiss on the cheek from “Black Panther” castmate Lupita Nyong’o, Danai Gurira basked in the revelry saying, “Being around my ‘Black Panther’ family is always deeply enjoyable.”

And however fast-paced the red carpet proved to be aligning with her heart, Patricia Arquette was kept calm as her boyfriend Eric White stood close by and her daughter held her hand. “I mean, really, I’ve been in denial about all of this until about an hour ago,” she said. “Then I started having a low-grade anxiety attack that I’m hiding while we speak.”

The actress, who is nominated for her work in “Escape at Dannemora,” went on to say, “I’m not comfortable really getting all dressed up. I’m kind of an overalls person, so I have to push past my comfort level. But I’m lucky that I have this support system, my family. They always make me feel loved and beautiful.”

For Spike Lee, nerves and preparation were not much of a concern. When asked of his speech in the event of a win for Best Director, he said with a smile, “My wife told me I need to start working on one. I don’t do films to be rewarded by organizations, but the reward comes from people coming up to me with how they were affected by the film. That’s the real joy.”