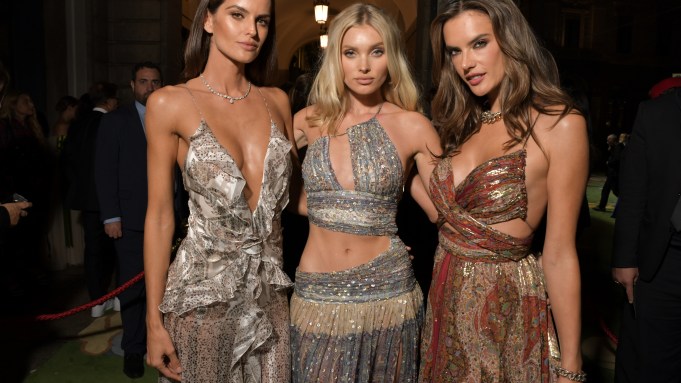 MILAN — “What beautiful English,” said Sophia Loren, praising in jest her own efforts to introduce Valentino Garavani on stage at the Green Carpet Fashion Awards on Sunday evening. Loren also joked about her feeling more comfortable speaking in Italian — “but I’ll spare you my Neapolitan,” she said to a round of laughter. Surprisingly, the legendary actress said this was her first time at the La Scala theater. Calling Valentino “a friend, a master and a legend,” she handed the GCFA Legacy Award prize to the couturier, who in turn appeared to be starstruck. “My biggest joy was when I found out that Mrs. Loren accepted to do me the honor of handing me the prize on this exceptional evening,” the designer said.

“I am very, very happy for  Mr. Valentino. I grew up with this idea of couture, and his name meant Italian fashion. It’s a brand that has passed through various phases, but reinvented itself after couture with ready-to-wear and then accessories, keeping its values but making them contemporary,” said Pierpaolo Piccioli, giving a shoutout also to Giancarlo Giammetti for his “dedication” to the brand and efforts to internationalize it.

Piccioli, who handed the GCFA Art of Craftsmanship to artisan Pino Grasso, said, “We need to celebrate the people behind fashion, those that work behind the scenes and shine light on them. If not for their work, we would not be allowed to do ours.” Piccioli was accompanied by Adut Akech, a presenter of the event with Jon Kortajarena, who was wearing a fully sustainable azure Valentino gown and naturally sourced Chopard diamonds. The designer said it was “very important for me that Adut is embodying the beauty of a Roman brand, with no boundaries.” He also noted that “70 people working in Roma [at the headquarters near] the Spanish Steps, that is also sustainable, we produce everything in Italy.”

The third edition of the awards, held at the tail end of Milan Fashion Week and introduced on stage by Livia Firth and Carlo Capasa, creative director of Eco-Age and the head of the Italian Fashion Chamber, once again added a dose of glitz to the city.

Colin Firth and Amber Valletta handed the GCFA Groundbreaker Award to Stella McCartney. “Finally I don’t feel like the freak in the room,” the designer said of the growing interest in sustainability. Upbeat and wearing a short black viscose dress — pointing out that it was fully sustainable — McCartney reminisced about how she grew up on a farm as a vegetarian and how that influenced her design ethics and, before taking her leave, she called part of her team up on stage with her.

Another pioneer in sustainability, Kering chief executive officer François-Henri Pinault, was rewarded with the Visionary Award by Ginevra Elkann, and he also praised team effort. “Sustainability is hard work and it requires dedication and we have very dedicated ceo’s. This is a collective recognition,” he said. “Leadership takes vision and modern luxury equals a sustainable business. Without execution, vision is meaningless and acting alone is completely useless.” Once again, he said there was no room for competition among fashion groups, citing the Fashion Pact signed in Biarritz, France, in August in the run-up to the G7 Summit and noting there will be another meeting in Paris on Oct. 24.

Ahead of the event, on the green carpet made of recycled fishing nets, Veronica Etro said “we must have fun,” of developing sustainable clothes. “We have everything, we just need a little creativity,” said the designer, accompanied by Alessandra Ambrosio, Elsa Hosk and Izabel Goulart, all wearing evening gowns created with upcycled, archival fabrics. She admitted “it’s a very long path, we must change the mentality and take into account the supply chain, but at least we’ve all started taking steps in the right direction.”

A few hours after his Gucci show, Alessandro Michele looked relaxed and was eager to attend the event, flanked by Lou Doillon and Gucci ceo Marco Bizzarri. “I come because there are people I love and it’s an opportunity for Milan to stay together and, for a reason, that is absolutely important. I think it’s a subject that interests everybody,” Michele said of sustainability.

“This is a new, beautiful Milanese tradition,” said Marni’s creative director Francesco Risso, who explained how with the company he has “recovered tons and tons of plastic from the oceans and industrial waste, and artist Judith Hopf created palms and a ceiling [installation] for the show with this reprocessed plastic. We tried to be creative to start to do something and change things and the way we think of and work on the fabrics. It’s something we think of every day.”

“We should all try to manage our own time better, dedicating part of it to the spirit and another part to the mind. Another part should be dedicated to work and another to be connected, but always with balance. We all should live and work according to nature,” said Brunello Cucinelli.

“At home, we avoid the use of plastic bottles. We don’t buy them and we don’t use them. We are all very committed to that,” said Emilio Pucci image director Laudomia Pucci. “For me it’s crucial that my children develop environmental awareness. They understand the importance of these issues, but we have to help them to learn what do.”

German model Toni Garrn, who walked the Fila show earlier on Sunday, attended the gala event in a vintage Alberta Ferretti gown, which Taylor Swift wore at the Grammy Awards in 2014. Garrn was accompanied by Ferretti and her brother Massimo.

For model Anna Cleveland, sustainability is not only drinking water from glass bottles instead of plastic, as she likes to do. It’s also an attitude toward life. “I came to Milan Fashion Week only to walk Lavinia Biagiotti’s fashion show and attend this event with her,” she said. “Being sustainable is about friendship, support, understanding and doing things together.”

The evening was closed by a dinner at the city’s 16th-century palazzo housing the city hall opposite La Scala.

Here are the other awards of the evening: