Global Swarming: Hollywood Parties It Up Ahead of the Golden Globes

A handful of events competed for the A-list social calendars in Tinseltown before Sunday night’s ceremony.

By Marcy Medina
with contributions from Lindzi Scharf
on January 15, 2012
View Slideshow 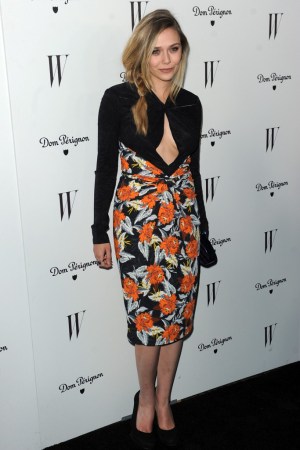 The Hollywood hype machine shifted into full gear this weekend ahead of Sunday night’s Golden Globe Awards ceremony. Suffice it to say that those looking to party before the party had plenty of options.

W’s annual Golden Globes pre-party at Chateau Marmont on Friday was so A-list that Tom Cruise was among the first to arrive. The hotel’s penthouse quickly filled up with the likes of Orlando Bloom and Miranda Kerr, Charlize Theron, Emma Stone, Jessica Biel, Sofia Coppola, Thomas Mars and Kirsten Dunst. “I wore chicken cutlets last night,” Theron was overheard telling a friend who complimented her on her dress for the previous evening’s Critics Choice Awards. Nobody seemed in a particular rush to leave as the Champagne glasses kept being refilled. Having a father who owns the hotel has its perks. Mid-way through the evening a security guard was heard radioing in a request to catering from Alessandra Balazs: “She’d like a bottle of tequila and some limes sent up.”

CAA’s Pre-Golden Globe party at nearby Soho House West Hollywood on Friday drew its own elite crowd that included Madonna, Sean Penn, Reese Witherspoon and Robert Downey, Jr. Only 30 minutes into the gathering, the space was so filled with stars that there was a line to get in. (Forget members: It was one of two nights of the year that the club is closed even to card holders.) Penn continually greeted industry friends with a courteous, “Nice to see you.” Cameron Diaz chatted with newcomer Lily Collins near the grand stairway. Later, Collins was introduced to Ben Kingsley and Leonardo DiCaprio. Jason Statham guided girlfriend Rosie Huntington-Whiteley straight to the back patio garden and Eva Mendes chewed gum and air kissed friends before following the duo.

A veritable army of British thespians showed up for the Los Angeles chapter of BAFTA’s annual Tea Party at the Four Seasons Hotel at Beverly Hills in on Saturday. “It’s lovely to be a part of a little movie that’s getting so much recognition from my peers,” said Kenneth Branagh of “My Week With Marilyn,” which was directed by fellow Brit Simon Curtis. The director gave his leading lady Michelle Williams a kiss on the cheek, saying, “Congratulations darling, I’m so proud of you.” Felicity Jones expertly balanced her teacup and saucer in one hand while summing up her surroundings: “It really is such a nice gathering.” Even the French-Argentinean actress Bérénice Bejo, co-star of “The Artist,” got into the spirit of sipping tea. “I’m not stressed out about wanting to win all the awards, I’m just enjoying my time in Hollywood,” she offered. Other stars who made the rounds included Charlize Theron, Chris Hemsworth, Viola Davis, Elizabeth McGovern and James Cromwell.

On Saturday night, Black Town Cars mixed with MTA buses in downtown Los Angeles as The Art of Elysium’s Heaven Gala took over historic Union Station. The evening, conceptualized this year by vintage guru Cameron Silver, featured jazz quartets for the cocktail hour as well as a Fatburger truck for the after-party. Commuters stared in awe as the black tie crowd including Rashida Jones, Amber Heard, Molly Sims, Abigail Spencer, Tracee Ellis Ross and Camilla Belle made its way through the station to the seated dinner. “I came in town just for tonight,” said Michelle Trachtenberg “and the place looks fabulous.”

As guests found their places at the curved dinner tables, they put on the gold wreaths that were on each plate, adding to the Art Deco atmosphere. “They said the dress was supposed to be ‘ethereal,’” said Rose McGowan. “So I went with white. I mean, you can’t get much more heavenly than that.”