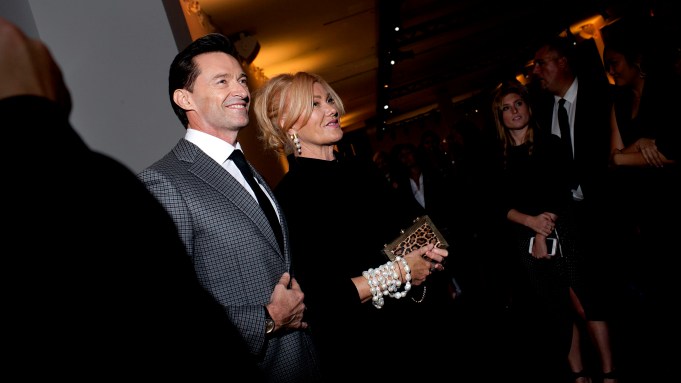 “Michael is like the beating heart of the city,” said Hugh Jackman on Tuesday evening, singing the praises of Michael Kors. “If there’s a community of people helping others, raising money, Michael seems to be there.”

Kors — and the team at God’s Love We Deliver — seemed to think the same of the actor; Jackman was honored with the Michael Kors Award for Outstanding Community Service at the annual GLWD Golden Heart Awards, which drew a crowd that included everyone from Priyanka Chopra, Iman, Naomi Watts and Ashley Graham to Neil Patrick Harris, Bette Midler, Nathan Lane, Cush Jumbo, Ella Hunt, Emily Robinson and more to Spring Studios.

Jackman and his wife, Deborra-lee Furness, met Kors years ago at a restaurant in Sag Harbor, N.Y., and have been friendly since.

Lynda Carter arrived with friend Blaine Trump. “This is a celebration and an honoring, and a way to get new people in,” Carter said of coming out for the annual fund-raiser.

“He’s never changed — he’s truly the same person I met, I don’t know, maybe 35 years ago,” Iman said of Kors. “He’s somebody who is very excited about dressing women, solving problems for women, creating something that is totally unique. He’s still excited. In New York, it becomes blasé. He’s always excited. And it becomes infectious.”

“I don’t know how to say this: a nice Jewish guy from Long Island? Fire Island, Long Island…we come from the same heritage, let’s put it that way,” Donna Karan said. “He’s a real person. We share the same common goal of health care — there is nothing more important than where is the care in health care.…This is not a time to be a ‘me,’ but a ‘we.’”

Karan whipped her ponytail around as she made her way down the press line. Watts passed Jackman with enthusiasm, giving him kisses on the cheek as she dashed by. Harris, meanwhile, blew kisses as he walked. Further down, Kors and Anna Wintour simultaneously donned their signature shades before facing the cameras.

Jeff Klein Gets Intimate With No. 850 and San Vicente Bungalows

Ina Garten Listens to Taylor Swift While She Cooks