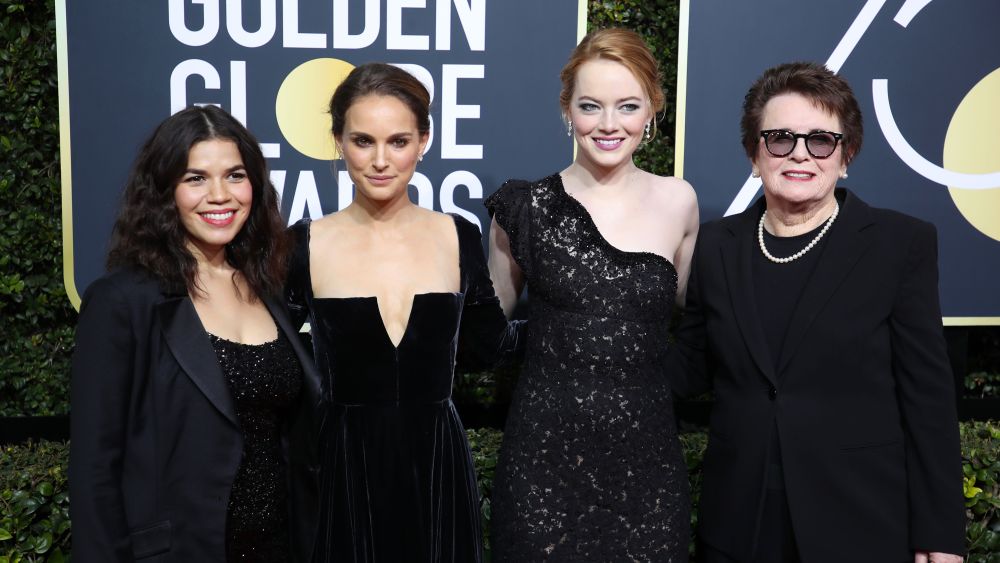 It’s not every day that “solidarity” is the most overused word at an awards show, but such was the case at the 75th Golden Globe Awards on Sunday. “I stand in solidarity” has officially replaced “I feel like a princess” as the most oft-repeated statement on the red carpet, but it was the cause célèbre — Time’s Up made good on its efforts for actresses (and actors) to wear all black to show their support for victims of sexual harassment and call for gender parity across all industries.

But despite what some may have thought, it didn’t stop people from talking about their gowns and giving credit to the designers, many of whom remade previously selected pieces in black at the 11th hour. Take Chanel’s Italian ambassador Alessandra Mastronardi, who touted her couture creation, which was, naturally made just for her in black. Former Julien Macdonald employee Caitriona Balfe, who was nominated for her lead role in Starz’s “Outlander,” also managed to score a Chanel Haute Couture gown because she’s a runway sample size, natch. “Men have been wearing black for years; it’s our turn,” Balfe said.

Even those who were too busy to stop and do interviews made sure that reporters knew who made their gowns. “She’s wearing an amazing custom Armani,” said Jessica Chastain’s rep.

Katherine Langford, the young Best Actress nominee for Netflix’s “13 Reasons Why,” didn’t miss a single interview at her first Golden Globes, and she touted both her support for other women and her dress. “Prada made this dress just for me,” she said. Its waistband was covered in crystals, but she wore the real thing — courtesy of Chopard — on her fingers and in her long hair. “It’s still a special occasion that I felt called for some bling,” she said.

The red carpet still sizzled with energy and excitement, though not everyone on it was a movie star. In a statement released hours before the show, actresses Meryl Streep, Michelle Williams, Emma Stone, Susan Sarandon, Emma Watson, Shailene Woodley, Amy Poehler and Laura Dern revealed they would walk the red carpet with gender and racial justice activists.

“We’ve known each other for a while,” said Sarandon of Rosa Clemente. When asked if the two were planning to appear together and wear black at other awards shows, Sarandon said, “Well, for SAG I’m selling myself. People can buy raffle tickets to benefit a school in Uganda and the winner will be my date at SAGs. Sorry, Rosa.”

Michelle Pfeiffer, in Dior, said her custom jacket and skirt would be auctioned off by Condé Nast with other designer Globes gowns, the proceeds of which would go to the Time’s Up legal defense fund.

Also making a statement were the black and white Time’s Up lapel pins worn by many of the men. “Elisabeth Moss distributed these to all the men in ‘Handmaid’s Tale,’” said O.T. Fagbenle. “I got mine from the streets,” joked “Get Out” star Daniel Kaluuya. He, like several men, opted for black shirts as well as tuxedos. “I feel lucky to be part of a new generation making an impact,” said nominee Timothée Chalamet.

Also part of a new generation of stars, last year’s Best Actress winner Claire Foy rocked one noticeable trend on the red carpet. Chic and androgynous in a Stella McCartney tuxedo, she said, “I simply didn’t feel like wearing a dress. I felt like wearing the pants, naturally.”