Before the Golden Globes, Hollywood was keeping quiet Saturday night.

By Marcy Medina and Jenny Sundel and Lindzi Scharf on January 11, 2015
View Slideshow 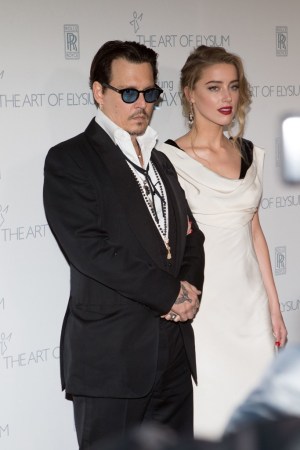 Before the Golden Globes, Hollywood was keeping quiet Saturday night at Barker Hangar in Santa Monica. Marina Abramovic was tasked with conceptualizing Art of Elysium’s annual Heaven Gala, and she came up with a “no speaking policy” for the cocktail portion of the evening.

As the likes of Johnny Depp and Amber Heard, Usher, Joaquin Phoenix and Dita Von Teese filed into the venue, they were greeted with Costume National robes and headphones.

This story first appeared in the January 12, 2015 issue of WWD. Subscribe Today.

“I like to do unusual events,” Abramovic said. “I like to have people come away with a different experience. At galas, it’s always the same setup. Let’s change the rules and the experience. There’s silence. There’s beds. And there’s pajamas. Let’s see how L.A. is going to like that. It’s difficult to find something original. So here I am. I tried my best.” Los Angeles seemed to like that just fine.

“There’s something really beautiful about it — this forced silence,” said Elijah Wood, who later DJ’d. “It’s a great equalizer.” For their part, Depp and Heard ignored the rules and chatted in a roped-off area until it was time to walk on stage for the actress to be honored for her work with the children’s nonprofit. The occasion was only dampened by the daylong rainstorm that soaked the red carpet outside and even some of the guests.

“My poor Valentino,” sighed Jaime King. The gala was one of the last of the many swanky shindigs thrown around Los Angeles since Thursday in anticipation of the coveted awards on Sunday. Earlier on Saturday, the Four Seasons Beverly Hills was filled with gorgeous Brits like Keira Knightley, Rosamund Pike and Cara Delevingne for BAFTA L.A.’s annual tea party. But all eyes were on “The Theory of Everything” star and Globe nominee Eddie Redmayne. Dapper in a cerulean Alexander McQueen suit, Redmayne said his approach to dressing for the busy awards season is to rely on the experts at McQueen and Gucci. “They have brilliant people there who basically tell me what to do,” said the newlywed, with wife Hannah Bagshawe by his side.

“He’s upstaging all the girls,” complained his costar Felicity Jones. “I’m like, ‘Come on, Eddie. Stop doing this to us. I can’t compete with that velvet suit!’” she said, recalling the Gucci ensemble he donned to their premiere in New York.

While a sign declared the soirée a “no selfie zone,” when Delevingne, Redmayne, Knightley and husband James Righton converged to joke around, all bets were off, as cellphone-wielding attendees snapped away despite warnings from security. Much earlier in the day, a phalanx of starlets — Allison Williams, Brit Marling, Kiernan Shipka and Michelle Monaghan — took over A.O.C. for W magazine’s It Girls luncheon. “It’s flattering to be invited to stuff like this,” said Gigi Hadid, who was catching up with fellow comrade in “It”-ness Nicola Peltz. Unlike many of the Globes-bound actresses there, the model will sit out the awards show because Sunday is boyfriend Cody Simpson’s birthday, and the two plan to spend it at home. “It’s important to make time, otherwise we’d never see each other,” she said. “We both work in entertainment and jobs can be so last-minute.…We keep crossing paths on planes.”

Though Miley Cyrus turned up at the magazine’s party Friday night for its “Shooting Stars” exhibit at the Old May Company building, it was Kim Kardashian who caused the biggest stir this time, at least among the paparazzi. She was in town not for the Globes — she was returning to New York later that night — but to take husband Kanye West and daughter North to a children’s birthday party.

“I brought my husband and we walk in and it’s, like, only the moms. I was like, ‘Sorry!’” she said. “All the moms were like, ‘How’d you get him to come here?’ I didn’t know some parties were moms-only. I’m still learning.”