A constellation of stars from the film, fashion and music industries turned out for the event held at the Hôtel du Cap on Thursday night.

By Katya Foreman and Alessandra Codinha on May 24, 2013
View Slideshow 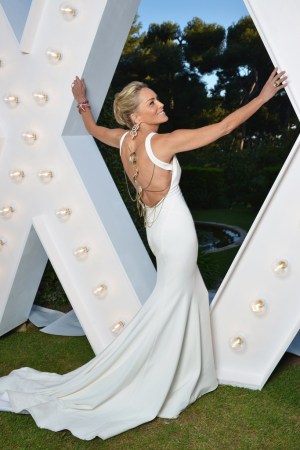 A perfect golden sunset accompanied the gold-themed 20th-anniversary edition of amfAR’s annual Cinema Against AIDS gala held in the grounds of the Hôtel du Cap in Cap d’Antibes, France, on Thursday night, with a constellation of stars from the film, fashion and music industries turning out for the event, including Nicole Kidman, Kristin Scott Thomas, Heidi Klum, Duran Duran, Christoph Waltz and Audrey Tautou. “It’s gorgeous here, the view doesn’t get much better than that,” said Karlie Kloss, descending the hotel’s steps with a view over the site’s park and the glistening Mediterranean Sea in the distance. She was literally heads above everybody in skyscraper heels and a black Vuitton pantsuit.

Dressed in a white Cavalli gown, Sharon Stone, one of the event’s chairs, kept gold as the surprise element of her outfit, regularly spinning around to reveal a bold gold serpent curling down her back suspended by chains. Liberty Ross, who later walked in the event’s fashion show of all-gold looks, inspired by amfAR’s late founding international chairman, Dame Elizabeth Taylor, and organized by Carine Roitfeld with help from Naomi Campbell, said she had just completed a “beautiful project” with Nick Knight and Amanda Harlech, making the photographs for a book on Isabella Blow’s archive, which will be the subject of an exhibition at London’s Somerset House in November.

“It’s a great time to be here because this is one of the most exclusive amfARs. I think it’s a good moment to celebrate. It’s been a lot of years, a lot of money has been raised and a lot of research has been done. It’s helped change the world, and I’m all for that,” said the actress, who got playful once she’d had a sip of champagne. “I feel free as a bird with all this chiffon, it’s wonderful, I can eat all I want.”

Guests filed into the sprawling amfAR marquee at sundown to a rendition of the “Rocky” theme tune by a live orchestra. Cavalli had designed the decor, based on a black, pink and purple floral theme contrasted with zebra dinner plates, with mounds of fresh flowers as centerpieces for tables.

Taking to the stage with amfAR chairman Kenneth Cole, Harvey Weinstein shared some of his favorite amfAR moments, such as the time “two very generous boyfriends paid $350,000 each to have George Clooney make out with their girlfriends,” adding, “Then there was the time we raised $30,000 for me to kiss Ryan Gosling, and frankly Ryan, I’ve had better.”

The auction got off to a stellar start, with a lot offering the chance to star in four major features by the Weinstein Co. generating 1 million euros, or around $1.3 million at current exchange, plus an extra 500,000 euros, or $645,000, when Weinstein put it up a second time. Leonardo DiCaprio donated two lots, including a trip to space in his company aboard Virgin Galactic. The actor was a guest at the table of Milutin Gatsby, whose grandfather possibly inspired “The Great Gatsby.” “I cannot say this officially, it’s off the record, but F. Scott Fitzgerald and my grandfather were great friends. They met in Paris in 1926 and spent a lot of time together in both Paris and the Cap d’Antibes. He had a very special life,” he said.

The night’s highlights included a powerful performance of ‘Goldfinger’ by Dame Shirley Bassey, greeted by a standing ovation.

The festivities rolled on to an after party at Eden-Roc, sponsored by Moncler, with Thom Browne leading the way. “I don’t think words can describe what this place is like,” marveled the designer, who had paired his tux jacket with a pair of tailored shorts.

“It’s the south of France,” he shrugged. “It just felt right.”