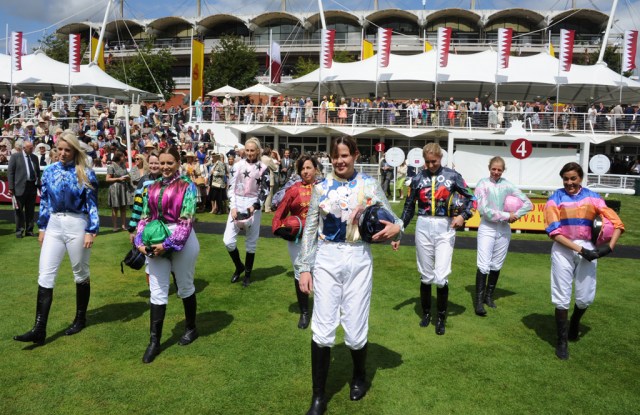 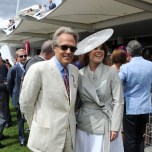 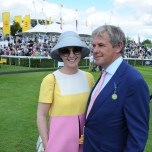 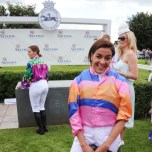 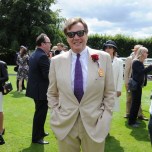 The annual Ladies’ Day horse race at Qatar Goodwood Festival in West Sussex, England pulled in more than $400,000 for charity on Thursday — and every penny was hard-won. Some horses bolted too early — and were later disqualified — while others didn’t even budge from the starting gate.

“He wouldn’t start; he just wasn’t going,” said a dejected Shadi Halliwell, adding that her horse, Betty’s Daughter, even bucked her. “But I stayed on.” Halliwell, group marketing and creative director at Harvey Nichols, joined a group of female jockeys who left their day jobs behind, donned their designer silks — Halliwell was decked in a pink and orange Roksanda top — and mounted their thoroughbreds in the hope of scooping the Magnolia Cup.

The sprint thoroughbred race can be dangerous and it’s never easy. Theo Fennell, the British jeweler and a longtime Goodwood-goer, compared it to “driving a Formula One car when you’re used to being in a Mini.”

Fennell made silver prizes for some of the day’s races, and handed all the Magnolia Cup competitors a busy bee pendant. “The busy bee is very much my signature — I like to spread happiness and honey everywhere,” said the jeweler. His wife Louise quickly cut him off: “And just like a bee, you can sometimes be very annoying.”

The Goodwood estate, which belongs to the Duke of Richmond’s family, has been hosting horse racing events since the 18th century, and the thoroughbred competitions at the end of July are a fixture on the British sporting calendar. This year is the first in a 10-year sponsorship deal by Qatar.

“This is an historic race track and part of the big international circuit,” said Hamad Bin Abdulrahman Al Attiya, president of the Qatar Equestrian Federation, who spent his day handing out big prizes to jockeys, owners, trainers and grooms. “We’re here because we want to support the horses, increase the prize money, and improve our own racing in Qatar.”

Goodwood is one of a number of European trophy assets the Qataris have either bought or thrown their weight behind. Qatar also sponsors France’s Prix de l’Arc de Triomphe, which takes place later this year.

The Qataris have nearly doubled the Goodwood Festival’s prize money to $7 million for the series of races that runs from July 28 through Aug. 1.

Despite its new Middle Eastern flair, Goodwood remains unmistakably British, with events such as the Tatler Stakes, the last race of the day.

Tatler editor Kate Reardon said Goodwood is “not only home to some of the best racing in England, but also one of the most chic and fabulous meetings of the year. Just look around: Long legs, glossy hair, a spring in their steps, Tatler readers one and all — and that’s just the horses.”

Reardon has taken part in the Ladies’ Race in the past, but now the new mother of twins said it probably won’t happen again. “I just about got away with it last time, and I’ve slightly lost my nerve. Still, a part of me wants to do it.”