Diners made the short journey from mocktails at the Whitney to Batali's La Sirena in Cadillac XT5s. 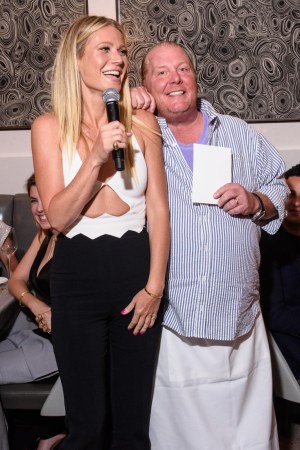 If Gwyneth Paltrow is backing a car brand, it might as well be Cadillac.

Alongside chef Mario Batali, the actress and Goop founder hosted the first in a series of “Road to Table” dinners in New York Wednesday night at Batali’s newest restaurant, La Sirena, as part of a partnership between Paltrow’s Goop and the car brand.

Diners — including Goop chief executive officer Lisa Gersh, Danielle and Jodie Snyder of Dannijo, Neil Blumenthal of Warby Parker and Claire Mazur and Erica Cerulo of Of a Kind — first met at Untitled at the Whitney, after which those interested in a test drive were handed keys to a fleet of black and white Cadillac XT5 sports utility vehicles, which they used to make the half-mile journey to La Sirena on Ninth Avenue. Luckily, hired drivers were on hand to do the parallel parking along West 16th Street.

“It’s funny, dealerships trust people on test drives, but a bunch of Manhattan people after drinks at the Whitney…I wonder how many dents there were,” one guest mused. (Actually, the only beverages served at the Untitled “cocktail” hour were mocktails.)

Paltrow and Batali are longtime friends, dating back to when Paltrow started visiting Batali’s Babbo restaurant in the Nineties. The pair participated in a PBS documentary series about the food of Spain, and Batali penned the foreward to Paltrow’s first cookbook, “My Father’s Daughter.”

“He’s exposed me to places and flavors…we’ve traveled a lot together, standing up in a bar eating clams or at a super-gastronomic restaurant,” Paltrow said of her longtime pal. “He’s really fun to eat with, he appreciates food.”

On the menu Wednesday night was a tricolored salad with Chianti vinaigrette, sweet corn agnolotti pasta with basil butter, a choice of beef braciole or olive-oil-poached halibut and a summer fruit panna cotta for dessert.

Paltrow, who was dining at the trattoria for the second time since its opening in February, went off the evening’s menu, requesting instead a pici pasta with sausage and escarole. “I thought the food tonight was phenomenal,” she gushed.

Guests were relieved to discover they were relieved of driving duties for the night. Cadillac Escalades waited outside to escort everyone home.

“You know what I can’t wait for?” one guest pondered rhetorically. “Those self-driving cars.”