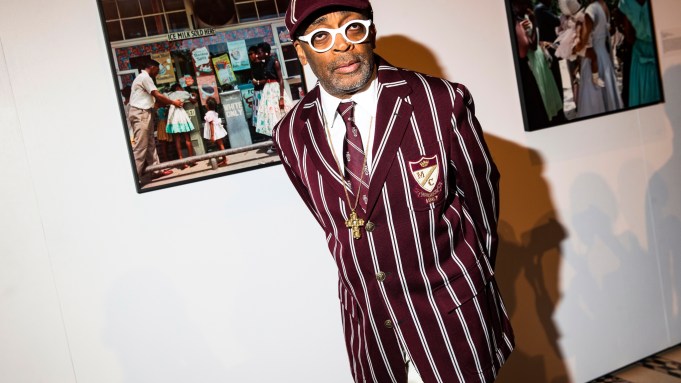 “There’s a lot of money in this room tonight, I like this,” said Kasseem Dean, aka Swizz Beatz, as he looked out at the packed room at Cipriani 42nd Street in Manhattan on Thursday night. The Gordon Parks Foundation Annual Awards Dinner had drawn a full house of supporters. “So don’t get shy when that time comes around; don’t get shy because now more than ever we have to support the Gordon Parks legacy.”

“I grew up looking at images that Gordon Parks created, not even knowing it was Gordon Parks as a young person,” said Tonya Lewis Lee during cocktail hour. “His work, those black-and-white images of just regular people, were so powerful to me in a way that I didn’t even realize. He showed me that you can use your own art to really make an impact and shine a light on things.”

Several of the late photographer’s iconic photographs were displayed on a wall to greet guests as they entered the room; the prints would be auctioned off later in the evening.

Asked if one of Parks’ photographs especially resonated, Lee noted a few that hit particularly close to home. “We have a few Gordon Parks at my home,” she said, calling out  the photographer’s famous “American Gothic” image of a woman posing with a broom in front of an American flag and “Invisible Man,” inspired by Ralph Ellison’s novel. “The one that really stands out to me right now is a self portrait of [Parks] next to his camera,” Lee added.

“In times like this, I think it’s really important to support and sustain institutions like [the Gordon Parks Foundation],” said Bradford, who was later introduced onstage by Cooper. “The work that they do is important because it can change lives, it can help artists. It’s about longevity and sustainability.”

Dean touched on that importance as he welcomed the crowd following an opening performance by The Roots member Black Thought. “Photography is one of the strongest mediums in the world,” said Dean, as Parks’ photos were projected on large display screens flanking the stage. His 1956 image “At Segregated Drinking Fountain,” taken in Alabama in 1956, served as the evening’s central backdrop; one of the women pictured in the photograph, Cora Taylor, was in the audience as a special guest.

Fila and Slam Jam Team Up for Capsule Collection