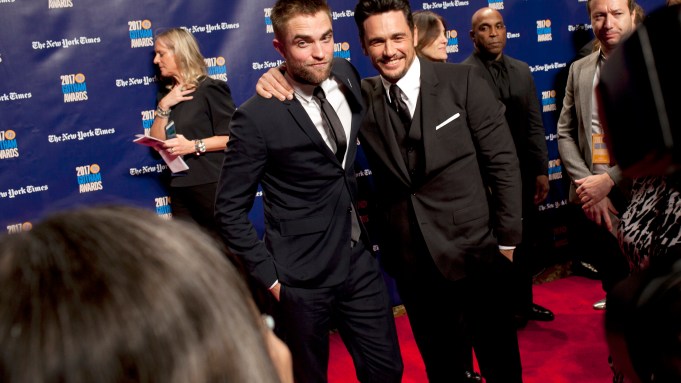 “Alright so I’m here to tell you that tonight something remarkable has happened,” Ethan Hawke boomed to the crowd seated inside Cipriani Wall Street on Monday Night for the IFP Gotham Awards, which recognizes independent films. “In a world where daily we are asked to be small, to stare at the blackness of men’s hearts, I am here to do something else. I am here to honor a friend.”

Hawke was introducing Jason Blum, who he met at a West Village diner in 1992, when Blum was just an aspiring film producer. Now the chief executive officer of Blumhouse Productions, Blum helped make one of 2017’s most buzzed about films, “Get Out,” which was one of Monday night’s big winners, picking up awards for best screenplay, breakthrough director and the independent film audience award.

As an unofficial kickoff to awards season, Gotham Awards serve as an early barometer for which films could become major award show players; last year’s best feature winner “Moonlight” went on to win the same award at the Oscars. “Call Me By Your Name” walked away with the best feature trophy this year and is poised to pick up more awards throughout the season.

“Call Me By Your Name” costar Timothée Chalamet got an enthusiastic nod, picking up an award for breakthrough actor. The 21-year-old, a New York native, thanked a diverse list of his fellow townies from onstage, including Edie Falco, Al Pacino, Greta Gerwig, Mary J. Blige, Martin Scorsese, Cardi B — and his mom. Despite his busy year, the young actor credits his hometown for helping him stay grounded. “There’s the gift of getting to be in New York, where I’m from — and my mom’s staying over there,” he said, gesturing vaguely toward somewhere in Manhattan.

Chalamet was donning a burgundy velvet suit for the evening, and Kumail Nanjiani and Emily Gordon had both come similarly festooned in plush red. “We planned that,” Gordon said, and her husband quickly chimed in. “We’re trying to ingratiate ourselves into ‘Call Me’ photos.” What do the pair, who cowrote “The Big Sick,” appreciate most about working in the world of indie film?

For “I, Tonya” star Margot Robbie, the appeal of lower-budget films is size.

“I love the scale of indie films,” she said. “It’s more of a community feel, because you have a smaller group of crew members. And I enjoy the hustle of it. It’s really hard, and you have to really work hard for every single win, but every win is that much sweeter.” Although the actress, nominated for best actress, didn’t win an award that evening — the award went to Saoirse Ronan for “Lady Bird” — she walked away from her portrayal of disgraced ice skater Tonya Harding with a fresh perspective.

“It was an interesting time to reflect on media and how we as a society kind of eat up what we’re given and what we’re told with these little soundbites, and we pass judgment so quickly,” Robbie said. “And I guess what I’ve learned is to not judge so quickly.”

James Franco was the Best Actor winner for his portrayal of Tommy Wiseau in “The Disaster Artist.” “This made me reconsider what defines artistic success or failure,” said Franco of the project, which he also directed. “Success can be a matter of what one does with failure.”

In addition to Blum, other tribute awards were bestowed throughout the three-hour ceremony to Sofia Coppola, Ed Lachman, Dustin Hoffman, Nicole Kidman and Al Gore.

The former Vice President of the U.S. and current environmental activist took the stage early in the evening to accept his award from Dan Rather, thanking a list of producers from his documentary “An Inconvenient Sequel: Truth to Power.”

“There are two other people I want to acknowledge, just because I’m from Nashville. My Nashville peeps Nicole Kidman and Reese Witherspoon are here,” Gore said, sounding slightly giddy. “I have to say — it’s not part of this event — but ‘Big Little Lies’ was awesome.”