The event honored the charitable work of a number of dashing dudes, such as actors Andrew Garfield, Taylor Kitsch, Joshua Jackson, and Zachary Quinto. 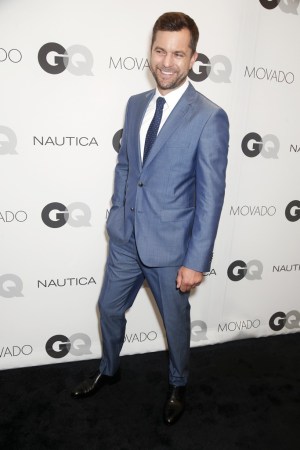 The gentlemanly factor was certainly in effect on the rain-soaked red carpet, where the honorees were on their best behavior. Kitsch, an early arrival, dressed up for the occasion, donning a Prada suit that would have been out of place on the football fields of “Friday Night Lights.” “I’m a big fan of them,” he said. But fear not, Tim Riggins fans, that signature greasy mop of hair was still intact. Kitsch was being recognized for his work with the African Children’s Choir, but he was quick to note that he himself was not a professional singer. “I honestly wish I was a singer,” he said. “I have some amazing musician friends and I live vicariously through them.” His genre of choice? “Eddie Vedder is probably number one for me, but I go all over.”

Further down the carpet, Crews did his gentlemanly duty by appeasing photographers’ requests to flex his pectoral muscles, while a very bearded Garfield posed for pictures before ducking inside.

Jackson, Pacey in “Dawson’s Creek,” being honored for his work with Oceana, was last to arrive, and shared his own rules of what it means to be a gentleman. “Chivalry is part of being a gentleman, but I don’t think being composed at all times is gentlemanly,” he explained. “Sometimes you need to be outraged by things. I think that’s part of being a man. There are certain things that you shouldn’t stand by that you witness.” That said, Jackson was about to perform quite the gallant gesture by flying out to visit girlfriend Diane Kruger in Paris for the weekend. “That’s pretty nice, if I do say so myself,” he said.

As the wine and whisky began flowing, the honorees loosened up and sound bites became a bit less courteous. “It’s not glamorous,” said Garfield said of working with Worldwide Orphans and the Youth Mentoring Connection while accepting his award. “It’s heavy s–t.”

Unsurprisingly, it was Riggins (er, Kitsch) who one-upped Spiderman in the obscenities category. “The way to make a difference is through action,” Kitsch said. “Just do it, take a risk and go forward. And whoever’s trying to pull you down, f–k ’em.”