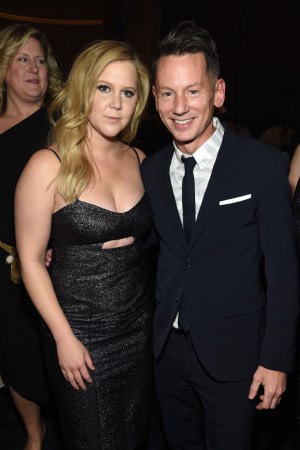 New York Fashion Week isn’t the only game in town.

GQ hosted an after-party for the NBA’s three-point and slam-dunk competitions Saturday night — part of the all-star game weekend — at Exchange Place in Lower Manhattan.

The party kicked off at 11 p.m. but didn’t get going until 12:30 a.m. with a performance by The Roots. As the band broke into a cover of “Express Yourself,” LeBron James retreated to a roped-off area near the bar, eschewing cameras and partygoers.

Comedian Amy Schumer made an appearance, greeting GQ editor in chief Jim Nelson with a hug and a lengthy chat, while Kevin Durant, clad in a black leather jacket and black brimmed hat, parted the throng.

Fans gathered around the basketball star, clamoring for a photo. Durant obliged for a few minutes before disappearing into the crowd.