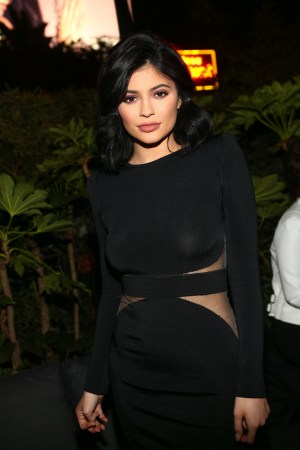 A clutch of stylish men, and quite a few women, gathered around Chateau Marmont’s pool on Thursday night for GQ’s 20th Men of the Year bash. Judd Apatow, Kylie Jenner, Wiz Khalifa, Taraji P. Henson and Amy Schumer were among those who turned out for one last pre-holiday Hollywood party.

“It’s all new to me,” the “Empire” star said of the celebration before stopping Anthony Anderson of “Black-ish” for a snap. Conveniently, his plus-one pal happened to be a photographer.

Shortly after, a friend of Gray’s said, “Tell him that Kim or Kanye could show up to this.” Although there were no guarantees, a hopeful “really?” slipped from Gray’s mouth before he posed with fans of his own.

While the Wests didn’t make it, Jenner and Tyga were there. After cameras captured her in an embrace with her beau (surely to prove the breakup rumors false), Jenner fell into deep conversation with model Lucky Blue Smith while Tyga found himself next to a collection of black ottomans near the DJ booth.

“Hey, what’s up fool?” Wiz Khalifa yelled a few seats over. “I’m trying to keep it GQ with the suit,” Tyga responded with a smile.

Keeping the playful spirit alive, Wiz Khalifa offered those around him a chance to light up. “I keep it in here so it stays fresh,” the rapper said of the robust orbs of cannabis he stored in a mason jar.

Although the number of those who partook was slim, an expanding crowd grew around the rapper throughout the night. Many were male fans like Mayer Hawthorne, who said humbly, “Hey, you probably don’t remember me, but I was in the studio with Jennifer.” Tyrese, French Montana and Meek Mill also came over to take a photo.

Nearby, Michael Keaton and Scott Cooper chatted while Paul Scheer and Apatow talked stand-up comedy. “Aziz [Ansari] did that massive coliseum,” Scheer said. “He really makes me laugh. I like what he’s doing.”

Shortly before midnight, the music began to lower and the crowd of women such as Serayah McNeill, Anna Camp, Sarah Silverman, Tinashe, Sarah Hyland and Naomie Harris began to taper off. While there were still small clumps of marathon talkers stationed poolside, Scheer gave in, “I’ve got to go. Five a.m. call time.”