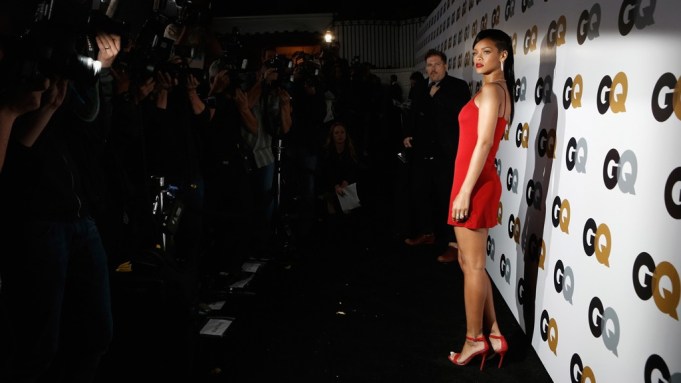 GQ’S MOTY MOJO: Hollywood’s most stylish men and women crowded into Chateau Marmont on Tuesday night for GQ’s annual Men of the Year party, including cover subject Ben Affleck and inside honoree, Jamie Foxx. While the night is usually about the gents, Rihanna stole the show, rightfully earning her GQ “Obsession” title. The singer, named “Woman of the Year” left little to the imagination on the December cover, donning only her tattoos and a cropped leather jacket. “She consulted me before she took that picture actually,” joked honoree Lamorne Morris. Aziz Ansari, also honored with fellow castmates of “Parks and Recreation,” felt robbed concerning Rihanna’s tattoo choice. “What’s funny is that I got the same tattoo over a year ago. I thought it was pretty original and then she got it too!” he said of her under-the-breasts tattoo of Egyptian goddess Isis. As guests like Aaron Paul, James Marsden, Ashley Madekwe, Krista B. Allen, Rashida Jones, Aubrey Plaza, Chace Crawford, Diane Kruger, Stephen Moyer, and Kid Cudi made their way through the crowded parlor, others chatted outside on the cozy, lush patio. While posing for photos and chatting with GQ Editor In Chief Jim Nelson, honoree Seth MacFarlane glanced at Rihanna’s cover and proclaimed, “I’m going to walk out of here later wearing what she’s wearing.” When she finally arrived in a red Calvin Klein dress, Rihanna graciously thanked Nelson for naming her 2012’s leading lady and couldn’t help but gush over her cover saying, “I love it!”