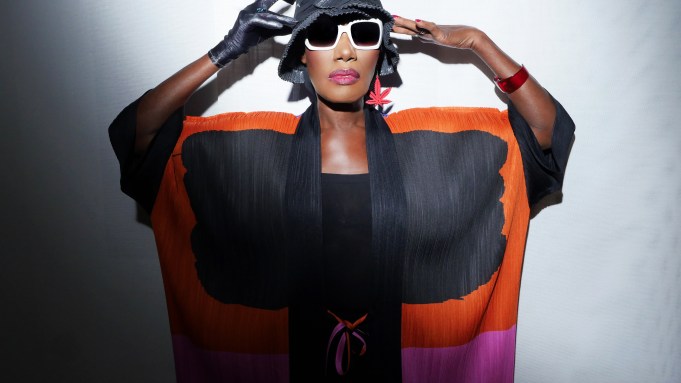 GRACE MANIA: Hundreds fans and friends including Kenzo Takada, Maripol and Patrice Calmettes lined up at Le Bon Marché on Friday night to have Grace Jones sign the recently released French version of her memoirs, “I’ll Never Write my Memoirs.”

“We’re sold out,” deplored an executive for the Paris’ department store, who noted that the frenzy was unprecedented. An eclectic crowd of all ages had started queuing at the Parisian department store’s bookshop early in the afternoon, some arting a photo or an album.

“We had a blast together. I saw her walking an Issey Miyake show. She was stunning. I asked her to walk for me,” said Takada.  The designer recalled her performance of “La Vie en Rose” at the Palace nightclub. “She was wearing a men’s suit, and had her brush hair cut. It was unexpected, modern and poetic,” said Takada who calls her “loyal and simple.”

“How sweet of her to have featured me in the book,” enthused Calmettes, a photographer and longstanding figure of the nightlife scene. He recalled hanging out with Jones, Jessica Lange and Jerry Hall in Paris. “They were three beauties. They were going out together all the time. They would wear bathing caps at night. I had never seen this.”

The book signing capped off a busy promotional week in the French capital. On one TV show, she was asked what she’ll do in five years. “Who knows, I can run for Prime Minister. Well, (Donald) Trump can run for President, bloody hell, I can run for Prime Minister,” she said with a laugh. Her French media tour coincides with an exhibition named “The Unbearable Lightness, The Eighties” at the Centre Pompidou, which gives good play to Jean-Paul Goude’s photographs of Jones.

“Paris is always with me; my son is half-French,” said Jones after her book signing. She was dressed in Issey Miyake from head to toe, accessorized with a cannabis-leaf-shaped earring. What does she wear these days? “Still the same: Issey Miyake and Azzedine Alaïa,” she answered.

“I don’t want to sit anymore,” she said, showing her dance moves, before heading to Les Bains, the legendary nightclub and hotel.

“An Italian journalist who worked at the Factory introduced me to Grace,” recalled photographer Maripol, who assisted Jean-Paul Goude for a year. “We spent last New Year’s Eve at Grace’s in Jamaica. She has an apartment on the beach. Her son Paulo and my son are now very good friends.  Grace is fond of her granddaughter.”

“She was the night,”  added choreographer Vickers.

“She is extraordinary,” said Top. “We saw her on stage at the Rex club four years ago. We got off from there electrified, as if we had put the fingers in a socket. She’s a hurricane,” said Top, who said he was inspired by her for a jewelry line he did in collaboration with Alber Elbaz for a Lanvin pre-collection.

At 4 a.m., Jones was still on her feet, dancing. She’s due to go to the Netherlands on Sunday to promote her book (that’s already out in countries including the U.S., Canada, England, Swiss, Belgium and Luxembourg) before going back home to London to finish her next album, that was partially recorded in Jamaica.