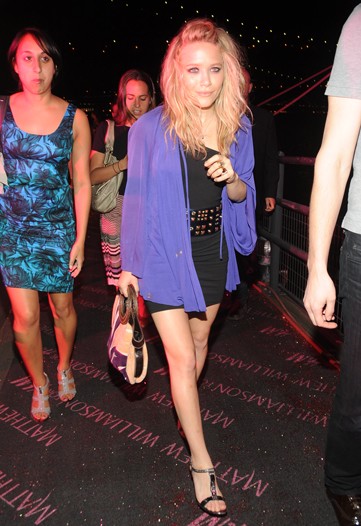 In a career that’s spanned over 30 years, Grace Jones has played everywhere from Studio 54 to Wembley Arena, and at just about all of her gigs, her audience has sat around wondering if the queen was even going to show up. Why should her Tuesday night show at a party celebrating Matthew Williamson’s collaboration with H&M be any different?

Held on a boat at the South Street Seaport that looked like a cross between the QE2 and a Las Vegas casino, a crowd including Chanel Iman, Helena Christensen, Mary-Kate Olsen, Daria Werbowy and dozens of drag queens all showed up to see the diva perform. “She’s one of the world’s finest,” said Duran Duran’s Nick Rhodes, who mingled in the VIP area, along with Adrien Brody, David Schwimmer and Lucy Liu. “They don’t make them with style like that anymore.”

Then came a high-pitched noise that sounded like something from a spaceship, accompanied by more rumbling and more ship shaking.

Suddenly, Jones was there, descending to the dance floor in a clear glass elevator, wearing a cape and a mask the shape of a butterfly. “And now, ladies and gentleman,” a voice said. “Heeeeere’s Grace.”

From there, the diva performed a four-song set featuring “Slave to the Rhythm,” “Pull up to the Bumper,” “La Vie En Rose” and “Williams’ Blood,” a track from her new album, “Hurricane.” There were costume changes between each song, another mask, which appeared to be battery operated — it had red lights that moved throughout it — and a bustier that could have asphyxiated a weaker celebrity. Just about everyone proclaimed to be impressed. Patricia Field first saw Jones back in the early Eighties, when she performed at the Paradise Garage and “rode in on a motorcycle” at about 6 a.m. “Her legs are still fierce,” Field said. “The wait was worth it.”