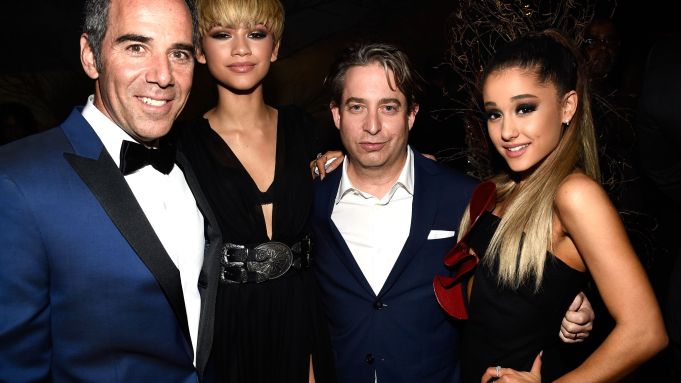 A Grammy queen once again, three-time award winner Taylor Swift and her date Selena Gomez were among the first stars to hit The Ace Hotel Theatre in downtown Los Angeles for Universal Music Group’s post-Grammy Awards party. The singers arrived via a secret side entrance and stayed for less than five minutes in order to pay respects to Universal Music Group chief executive officer Lucian Grainge. Swift, who changed into a shorter white-and-gold two-piece ensemble from her skin-baring pink Atelier Versace gown, also met up with boyfriend Calvin Harris inside, though the two avoided photos. Gomez politely declined to pose as well, while Ariana Grande’s excuse was at least imaginative: “I have a cold,” she said as she attempted to bypass the cameramen. But she soon cozied up to her label’s executives Monte Lipman and Charlie Walk.

Out on the party’s red carpet, Fifth Harmony’s Camila Cabello said she was pleased her gal pal Swift took home Album of the Year for “1989.” “You have no idea how excited I was to see her win,” she said. “I texted her this morning like, ‘Oh my god. I hope you freaking kill it tonight.’ She deserves it so, so much.” Asked what she thought of Swift’s supposed message to Kanye West in her acceptance speech, Cabello said, “She might have called him out, but I think she was calling out people in general. I think it was a wonderful message.”

So did the two girls plan to celebrate together? “Hell yeah,” Cabello said, before noting she dressed herself for her night out. “I actually bought it at Nasty Gal,” she said of her high-necked dress. “It was the best thing that I had, so I was like, ‘Why not?’ I think it’s very me personality wise. It’s fun, you know?”

Corinne Bailey Rae had a different approach. “I’ve had this dress for a while,” she said, wearing a look by Miu Miu. “I am not performing this year, and I am not nominated. My new album is not coming out this year until the spring. This is my dress to be like, ‘I’m here and I’m not trying to get in anyone’s way.’” Rae said her upcoming album will be “fun, joyous, experimental. It sounds a little different and weird but I really like it.”

Following Joe Perry’s “The Hollywood Vampires” performance with Alice Cooper and Johnny Depp, the Aerosmith guitarist said there would likely be a repeat performance in the near future. “I have a feeling we’re going to be touring. I can’t really tell you when, but it’s going to be sooner than later,” he said. As for collaborating with Depp, Perry said, “He loves the art of [acting], but he’ll tell you that music comes first.”

Mya exchanged her awards red carpet look for a red vintage dress, but said her Grammy prep was a low-key affair. “You see this hair right now? This was shower and go,” laughed the singer, who released a new R&B album on Sunday on iTunes called “Smoove Jones.” “I took a lot of influences from the Seventies, Eighties and Nineties. It’s a conceptual album, sort of like a fan appreciation project.”

Elsewhere, Zendaya sparked rumors of dating NFL player Odell Beckham Jr. after the two arrived together. Others in attendance included The Weeknd and Bella Hadid, Anna Kendrick, Brooklyn Beckham, The Black Key’s Patrick Carney and Michelle Branch, Diane Warren, Tove Lo, Shawn Mendes, Joe Jonas, and DNCE. Russell Simmons kept close to girlfriend Lucy McIntosh. The mogul wore a suit from his forthcoming collection Argyleculture, available at J.C. Penney later this fall. “I had a $2,000, or $3,000 tuxedo on yesterday and I looked at this one in the mirror and I was like, ‘Oh s–t, this is better.’ And it’s 190 bucks.”