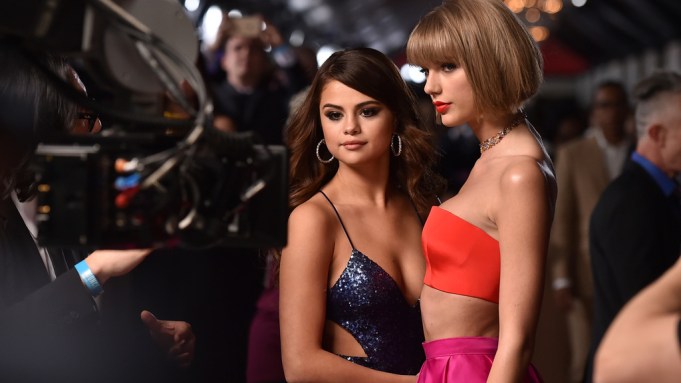 The 58th Grammy Awards at Staples Center didn’t disappoint red carpet watchers starved for the sight of their favorite musicians dressed to the nines.

Of the big names who came early, standouts included Selena Gomez in a Calvin Klein Collection spaghetti strap gown that elevated her usual body conscious, midriff-baring silhouette with an elegant midnight blue shimmer; Taylor Swift — who earlier had won Best Pop Vocal Album and Best Music Video for “Bad Blood” — in an Atelier Versace orange and fuchsia two-piece number that flattered her killer abs but looked very much like the Monique Lhuillier number worn by Lupita Nyong’o two years ago that inspired legions of knockoffs; Adele in a long-sleeved, pretty black Givenchy with slits at the shoulder, and Zendya in a sleek black tuxedo by Dsquared2. “I am very inspired by menswear right now so I wore a suit. I wanted to keep it simple,” Zendaya said.

Bonnie Raitt was also working a black pantsuit — her signature look, but updated with moto details and shimmery sleeves. “I have a stylist who knows what makes me happy,” Raitt said.

The Grammys is always rife with fashion don’ts, but music types either revel in rebellion or are happy to ignore Seventh Avenue critics. Among those who proved that black isn’t always a safe bet: Carrie Underwood in a black Nicolas Jebran gown that channeled prom (or Lady Diana circa 1981) on top and Angelina Jolie’s right leg’s Oscar moment on the bottom; Skylar Grey in a sheer caped tattoo print high necked that was trying too hard be avant-garde, and Elle King in feathered and fringed Christian Siriano with another leg-baring slit that was weighed down with too many feathers and flou.

And for those having Kim Kardashian withdrawal, a pregnant Chrissy Teigen arrived with husband John Legend sporting a flattering white belly-hugging gown a la Kim — it was perhaps inevitable that someone would pick up the mantle now that Saint has been born.