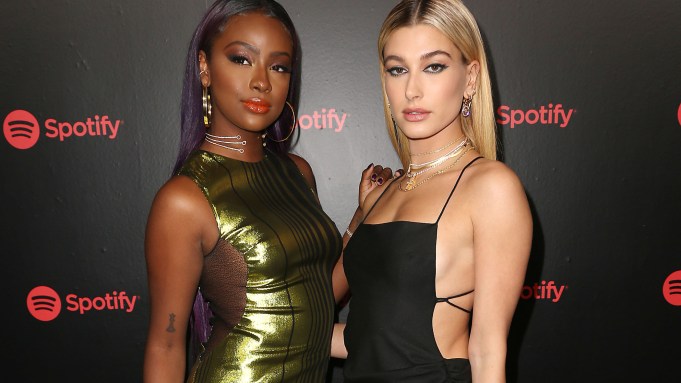 Music’s least likely pair came together Thursday night at Spotify’s Best New Artist party: Sting and Shaggy. The two announced earlier in the day that they are working on a joint album — news that subsequently prompted many questions of the “how did this happen?” variety.

“We’ve known each other for a few years, but only at a kind of distance, really,” Sting explained from the red carpet. “We sang together a few years ago, but we didn’t really know each other until about a year ago, when we started to do this song together called ‘Don’t Make Me Wait,’ which just came out today, and that was the beginning of this friendship. Then we started to make an album together probably because we decided to, just ’cause it sort of happened. We’re almost finished it.”

“Are we?” countered Shaggy.

“Well no, but we have to,” Sting said. “You don’t really finish an album, you abandon it at some point.”

“I’m a music fanatic,” Hunt said. “[I’m] excited to see Kendrick Lamar. I’m really excited for SZA, I love her entire album. I think it’s hard to come by albums these days that are so cohesive and beautiful through and through and she’s done that.”

A jet-lagged Alesso made his way down the carpet, having just flown in to New York from Sweden. “It’s really interesting to see how the Internet is creating new artists,” the DJ shared. “It’s not just about having songs these days, it’s really about connecting with people through all these social media [platforms]. It’s new times. I’m still learning how to reach out to people in so many different ways, not just through radio or streaming services. The Internet is changing the whole world everyday. I feel like I’m learning new things everyday.”

Like Hunt, Odesza and Chvrches revealed they were both rooting for Lamar. Martin Doherty of Chvrches even called Lamar’s album “Damn” “the most important hip-hop record of the last 20 years.”

And though most had music on the mind, Leslie was still thinking about the Paris collections, specifically Haider Ackermann for Berluti. “I want to see if people are wearing it or if I can be the first to wear it while I’m out here,” he said.