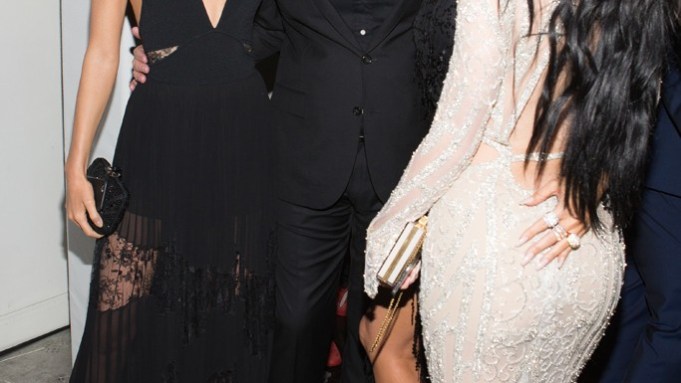 While there was no shortage of major fashion moments at Sunday’s Grammy Awards, Giorgio Armani decided to kick things up a notch by throwing its own after party for the first time. “Where is he?” asked Janelle Monáe when she arrived at the Hollywood Athletic Club. The designer himself wasn’t present, but niece Roberta was, mixing it up with the likes of Ricky Martin, Darren Criss and Armie Hammer, all wearing the label, of course. “We’ve never had a Grammys party. We said, ‘Why not have a beautiful party to pay tribute to the music world?’ ” Armani said. Elsewhere at the GQ-cohosted bash, Khloé Kardashian stayed close to younger sisters Kylie and Kendall Jenner as they made an early party appearance. Kendall was starting to describe the show but only managed to say that it was “fun” before big sister Khloé protectively dragged her away (perhaps before she could be asked about her brother-in-law Kanye West’s latest antics). Also taking in the scene were Estelle, Armani poster boy Calvin Harris, Jason Derulo, Miguel, Wiz Khalifa and “Empire” actor Jussie Smollett, who was enjoying firsthand the perks of starring in a blockbuster TV series.

“I’m such a newbie, but everyone has been so nice. People like Berry Gordy were coming up to me saying they love the show,” Smollett said. Rita Ora swung by well past 1 a.m., which might have been a tad late for Armani herself. “I think the party will go late. I don’t know about me, but the party will…,” she said.

On this particular weekend in Los Angeles, it was the music labels that dominated the party circuit for a change. On Saturday, Roc Nation pulled not just Rihanna, Beyoncé and

Jay Z, but also Kanye and Kim Kardashian to its annual brunch at a home in Beverly Hills. Newcomer Justine Skye had just one goal: “I’m looking forward to meeting Beyoncé.…I’m not even going to cut around it.” After the awards show, Warner Music Group’s bash at the Chateau Marmont was brimming with the label’s stars: Ed Sheeran, Lily Allen, Jamie Foxx, Katharine McPhee and Diplo, who, sadly for those hoping for Instagram material, did not come with his dates from the show, Nas and Madonna.

Members of the British group Clean Bandit were elated after winning their first Grammy for Best Dance Recording. “Winning the award was a massive surprise. We would have never expected it,” said Grace Chatto, who was equally pumped to hear her bandmate Neil Amin-Smith DJ the party. “I usually play house music,” Amin-Smith said. “But I think that won’t be appropriate tonight, so I’m going to play early 2000s R&B.”

Charli XCX arrived after switching out of the Moschino tuxedo she wore to the awards, into a tulle Moschino dress. She said it was inspired by the canine companion she brought with her to the red carpet. “I changed into this because my friend’s puppy was wearing Moschino, too, and I thought I’d match,” she said. Asked about her favorite moment of the night, she didn’t miss a beat: “Prince and his outfit.” Later, she switched again, into a leopard-print unitard.