Leonardo DiCaprio and his costars, as well as a lineup of celebrity guests, faced a downpour on the opening night of the Cannes Film Festival. 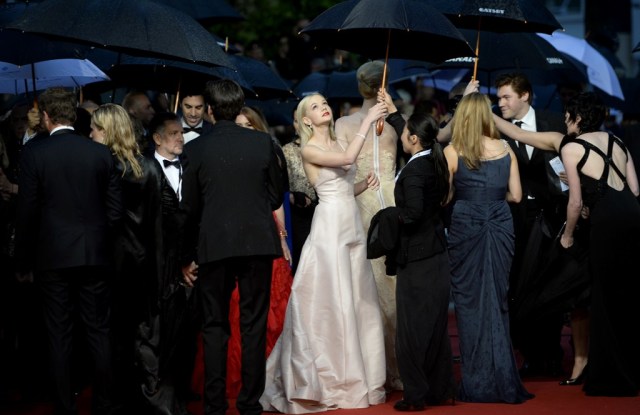 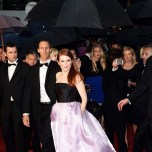 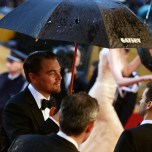 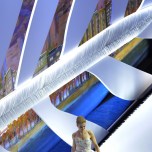 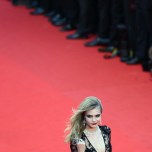 CANNES, France — Shrugging off wind and rain, a gaggle of flappers and their male counterparts shimmied their way up the red carpet for the screening of “The Great Gatsby” on the opening night of the Cannes Film Festival.

The crowd roared their approval for Leonardo DiCaprio, who was greeted by a hand-drawn sign proclaiming him “Leo le magnifique” — an homage to F. Scott Fitzgerald’s novel, known in France as “Gatsby le magnifique.”

Grabbing an umbrella from an attendant, DiCaprio signed autographs for fans before joining his costars in the Baz Luhrmann-directed film on the steps of the Palais des Festivals.

“Any longer, and I think my hair would have lost it,” she confessed once inside, patting down her sleek red locks. “I keep trying to keep it down.”

RELATED STORY: ‘The Great Gatsby’ Celebrates Premiere at The Plaza >>

Cindy Crawford, wearing a cleavage-revealing Roberto Cavalli gown, said the experience reminded her of some of her more challenging modeling assignments.

“In Malibu, getting in the Pacific for swimsuit stuff with Herb Ritts, it was always cold. Even though it looked beautiful, it would be freezing,” she said.

British model Cara Delevingne playfully roared as she showed Georgia May Jagger the brand new lion head tattoo on her middle finger. Jagger, a Cannes newbie, was sporting a lipstick red Cavalli gown with a fishtail that had soaked up some water on its way up the steps.

Miranda Colclasure, aka burlesque star Mimi Le Meaux, swept in looking, well, windswept. “I also just traveled 35 hours and had literally five minutes to get ready. So after all that, I think I did pretty good,” she grinned.

Inside, the atmosphere quickly warmed as Spielberg was greeted with a lengthy standing ovation, prompting the director to exclaim: “Mon Dieu!”

Wearing a pleated dress by Yiqing Yin, mistress of ceremonies Audrey Tautou recalled seeing “E.T.” at the age of five. Organizers paid tribute to another of Spielberg’s films, “The Color Purple,” with a performance of “Miss Celie’s Blues” by singer Krystle Warren, backed by a choir.

Attendees had better stock up on the feel-good factor — the forecast for the next couple of days is for rain, and more rain.

French actress Ludivine Sagnier, wearing a sleeveless vintage John Galliano top with a pleated Rochas skirt, shared some film-set wisdom for anyone tempted to complain. “An actress is never cold — never forget it,” she said.