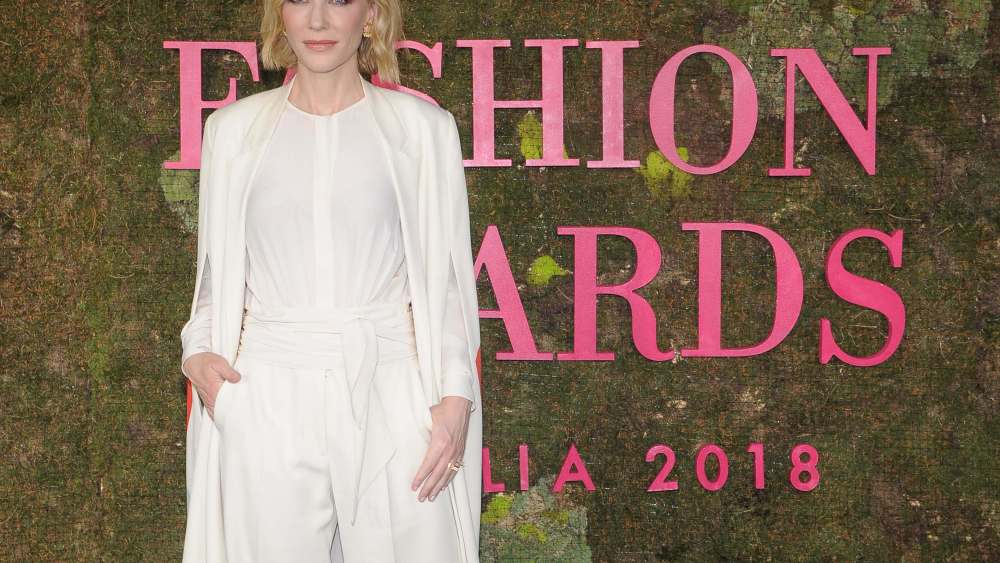 MILAN — The second edition of the Green Carpet Fashion Awards, Italia ceremony on Sunday evening raised the glamour quotient as the city center surrounding La Scala was cordoned off and designers, models, Hollywood A-listers and industry heavyweights arrived at the theater overlooking a lush garden — complete with the sound of chirping birds — set up for the event.

Livia Firth, founder of Eco-Age, and Carlo Capasa, president of the Italian Camera della Moda, played hosts, touting Italian craftsmanship and the handprint behind Italian fashion — especially in light of the recent accusations printed in The New York Times.

“I believe it’s right to create awareness and all that works to that end is good,” said Pierpaolo Piccioli. “To link sustainability to a glamorous black tie evening with international actresses and a red carpet is positive. Usually sustainability events are good initiatives but not glamorous. I like this glamour connection. Beautiful can coincide with sustainable. In any case, for me, sustainable is anything that is human. I work every day in Piazza di Spagna [at the Valentino headquarters near the Spanish Steps] with 70 seamstresses — this human approach to work and to life, this is sustainability.”

Carolyn Murphy, a passionate surfer and diver, has over the years voiced her love of the oceans, so she perfectly fit in with the guests at the event. “I’ve worked with the Surfrider Foundation for 15 years and with Richard Branson’s Ocean Unite to clean oceans,” she explained. “Livia [Firth] is brilliant and we always think of Milan for its fashion. What better way to start [working on sustainability]?”

Angela Missoni didn’t have much time to catch her breath after the brand’s show the evening before, but she admitted she managed to enjoy a few moments that morning at home near Sumirago, outside Milan, where she lives, before returning to the city for a day of meetings.

“Just looking out into the countryside makes a change. We have a quality of life there that is very sustainable,” she said. Of her outdoors fashion show, she said she “wanted a lunar feeling” and knew it would be an almost full moon that evening. “I had wanted to do a show with live music for a long time and I was so happy when I asked Michael Nyman in June to perform and he said yes right away.”

Missoni was flanked by her mother Rosita and Isabeli Fontana, who was wearing a Missoni gown with ruches made with raffia paper and recycled vintage clothes.

Larsen Thompson flew in from Paris, where she was “working with Givenchy,” she said. In Milan for the first time for fashion week, Thompson said her first film “Bloodline” with Seann William Scott just premiered in Austin. “I missed it, but they’re doing an L.A. premiere soon, which I’m excited about. Then also I’m working with Maybelline, so that’s been amazing. I’m doing their 2019 campaign, so that’s been a great ride. So blessed!”

Armie Hammer, who attended the Salvatore Ferragamo show on Saturday, spread the love, sharing his affection for the Ferragamo family — whose company artisans appeared on stage later, rewarded with a prize — and for Milan. “What’s not to love?” he said of the city.

While Hammer was not working on any project in particular, Alba Rohrwacher said, “Yes, I’m working on something, but one must never talk about it before. So I can only tell you what I’ve done and what is coming out.” To wit, next up is Austrian movie “Angelo” by Markus Schleinzer that has been presented in Toronto, London and San Sebastián, Spain, and the surreal comedy “Troppa Grazia [Too Much Grace]” directed by Gianni Zanasi, and out in Italy on Nov. 22.

Inside the theater, Hari Nef wondered with the audience, “Who would ever have thought leather could be made with apples?” as she awarded the Frumat leather company.

Cate Blanchett, handing the Eco Stewardship Award to The Woolmark farmers, emphasized how “creative industries can thrive in a sustainable way.” A representative of the farmers elicited laughs saying that they “had been looked after superbly in Milan. We will go back and look after our sheep in the same way.”

Diego Della Valle and Renzo Rosso shied away from being recognized for their efforts in restoring the Colosseum and the Rialto bridge in Venice, respectively. “It’s nothing special; there are many people that do like us. We are lucky and try to give back,” Della Valle said. Rosso credited his parents for raising him “to do what’s best for others.”

When Gucci president and chief executive officer Marco Bizzarri awarded Sinéad Burke for her work on inclusivity, the writer and activist said with self-deprecating humor: “It is not lost on me that they asked the tallest man in fashion to hand me the award.”

Amid rumors of a pending sale of the family company, Donatella Versace received the CNMI award in Recognition for Sustainability by one of the models she and her brother Gianni helped launch: Cindy Crawford, appropriately dressed in a green Versace gown. Crawford defined the designer as “an icon, never afraid to dare or break barriers. She talks the talk and walks the walk.” In a bright yellow gown and her trademark stilettos, Versace said she has “started the process of transformation” of the company in terms of sustainability. “If everyone does a little, things will change dramatically,” she said.

The event, attended by Milan Mayor Giuseppe Sala and the Minister of Cultural Activities Alberto Bonisoli, included a ballet choreographed by Roland Petit and a dinner at the city hall.

The Visionary Award to Suzy Menkes bestowed by Pierpaolo Piccioli.

The Handprint Award to Calabria Story bestowed by Colin Firth.

The Art of Craftmanship to the cobblers of Salvatore Ferragamo, joined by chairman Ferruccio Ferragamo, bestowed by Julianne Moore.

Technology and Innovation to Frumat leather bestowed by Hari Nef.

The Wellness Award to Elle Macpherson for her health business WelleCo bestowed by Alison Brie and Nerio Alessandri.

The CNMI in recognition for Community and Social Justice to Diego Della Valle and Renzo Rosso bestowed by Emily Ratajkowski and Petra Nemcova.

The CNMI in recognition of sustainability bestowed to Donatella Versace by Cindy Crawford.

The Changemaker Award to Cameron Russell bestowed by Angela Missoni.