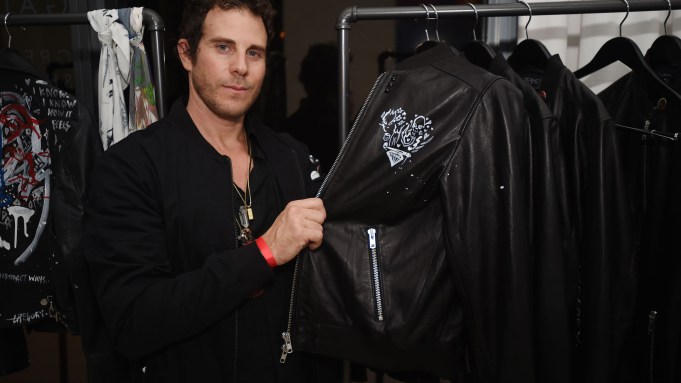 “I’ll sweat all night, but I gotta wear it,” said Gregory Siff, slipping into one of his painted leather bomber jackets Wednesday night at the Surf Lodge Bungalow. The artist, in from L.A., was risking heat stroke in the name of promoting the collaboration with DSTLD and Mercedes-Benz. Jacket on, he was ready for hosting duties: “Now I feel we can talk jackets.”

Siff appreciates denim with deep pockets (for cramming magic markers), noting Steve Jobs’ basic uniform enabled him to pour all his energies into thought. The limited-edition collection of black leather and brushed cotton jackets are embellished with his signature, tiny line drawings and sayings (“I am my own happiness dealer”) inside and out. The men’s and women’s variations are available at the Surf Lodge’s pop-up behind W South Beach for Basel.

“You feel his excitement and life experiences,” said Beth Redmond, his biggest collector who served on the benefit committee for the Whitney Museum of American Art’s 2016 Art Party. “It comes from the heart.”

She was among dinner guests, including Corey Epstein, cofounder of DSTLD; Lisa Falcone, Siff’s manager and the art editor for Treats magazine; Todd Kramer and Ryan Ross, Siff’s dealers and owners of Gallery Valentine in the Hamptons; collector James Chanos; Edsel Williams, an art adviser and director of the Fireplace Project in the Hamptons; singer-songwriter Brandon Boyd; developer David Edelstein, and Miami artists Bhakti Baxter and Martin Oppel.

“When I found out Jayma [Cardoso, co-owner of the Surf Lodge] was having a party, I canceled all my Wednesday night plans,” said Chanos, who sat beneath a giant video of Siff painting a Mercedes G63 AMG with Krink graffiti paint to mesmerizing effect.

“I just ate a big breakfast and found a parking lot,” said Siff, of the eight-hour job that finished just as the last of the daylight faded. “A guy parked his Mercedes next to me and said, ‘Don’t do that to mine.’”