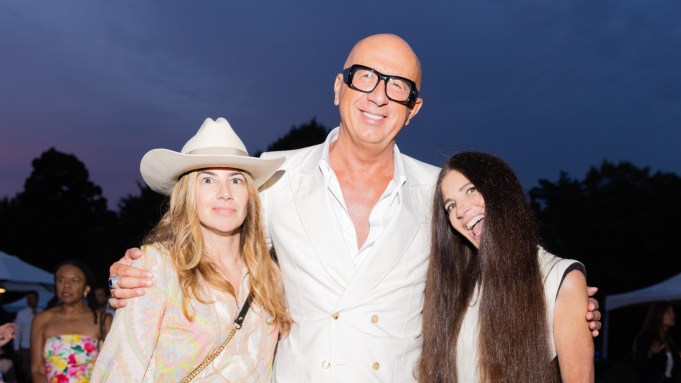 HAMPTONS — As well as a brain for business, Gucci chief executive officer and president Marco Bizzarri has moves.

Clad in a crisp-white and no doubt Gucci-tailored suit, paired with thick-framed black glasses, the tall Italian businessman could not be missed enjoying the dance floor at the brand’s second annual summer festival in East Hampton, N.Y., over the weekend, where he was joined by fashion icon Bethann Hardison and serenaded by DJ and producer Mark Ronson.

Via a seemingly endless stream of golf carts, guests — many of whom where kitted out in Gucci’s latest designs — descended on the three-acre East Hampton estate owned by stylist Elizabeth Saltzman and her family, of which the crown jewel is a Richard Meier-designed three-story modernist white abode. After dark, it was transformed into a luminous green and bright pink Gucci print — the same colors as the dance floor.

Fitting in with the style of the home, the separate pool area screamed Palm Springs vibes and was filled with lily pads and white flowers and surrounded by exotic plants sprinkled with bright pink hues.

As well as a Ronson DJ set followed by a silent disco, due to Hamptons rules regarding noise control, guests were greeted with various lawn games and local fare from Amagansett, N.Y., farm stand Amber Waves Farm; Loaves and Fishes, and Carvel, served on Gucci-print plates, and summer-themed cocktails featuring Código 1530 and local wine from Wölffer. After all, what Hamptons event doesn’t have Wölffer?

The event coincided with the recent launch of the Gucci resort collection featuring a selection of items from the world’s top travel destinations, including the Hamptons.

Gucci is one of a number of upscale fashion brands increasing its presence in the tony beach enclave situated at the far end of Long Island. Last week, Prada opened a permanent, 1,600-square-foot shop located at 2 Newtown Lane in the heart of the village of East Hampton, marking the first time the Italian luxury brand has opened a store in the Hamptons. This followed Chanel a month earlier unveiling its new ephemeral boutique store at 26 Newtown Lane, which will remain open through Labor Day.

Gucci, meanwhile, opened its permanent two-floor boutique, at 17 Newtown Lane, spanning more than 2,000 square feet in May 2021. Previously, it had a permanent location on Main Street in East Hampton from 2006 to 2009.