Rosario Dawson and Charlotte Casiraghi were among the guests to attend the show-jumping competition. 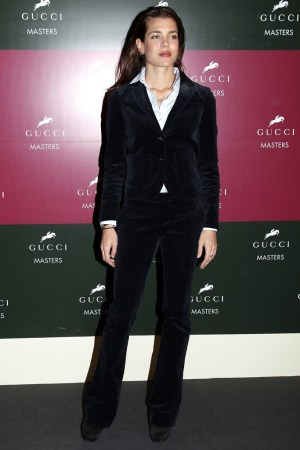 A keen horsewoman, Gucci creative director Frida Giannini revealed the house is working on restoring another film for Martin Scorsese’s The Film Foundation, which will premiere at the next Cannes International Film Festival in May. Giannini remained tight-lipped about the film’s title.

Dawson, who flew in for the event, was given a tour of the paddock with veteran huntsman Otis Ferry. “I love riding, but I don’t jump — those obstacles are so high,” she said, adding that she would be spending a quiet Christmas with her family. Gucci riding ambassador Charlotte Casiraghi also took in the event, having competed the previous day in the style and competition category.

Speaking of Gucci, the brand’s involvement in transportation stretches from four legs to four wheels — and now two. The company has unveiled a custom line of bicycles in partnership with Italy-based bicycle manufacturer Bianchi. Designed by Giannini, the new Bianchi by Gucci bicycles are available in two styles: a white hydro-formed steel single-speed model ($6,200) and a matte black carbon-fiber monocoque version ($14,000). They both feature the fashion house’s iconic green-and-red web stripe. Giannini also created a range of accessories, such as helmets, gloves and water bottles.