Italian brand fetes women in film and restores a 1972 classic. 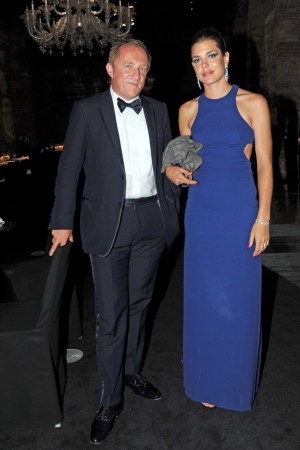 For the second consecutive year, Gucci celebrated women in the film industry with a dinner and awards ceremony, held during the Venice Film Festival on Friday inside the Hotel Cipriani’s Granai, an old granary for cereal harvests. Guests dined on lobster and ricotta tortelli under a wooden-beamed ceiling with long, elaborate chandeliers, as images of the nominees were projected on darkened brick walls.

Salma Hayek gave a passionate speech about the difficulties women and girls face around the world, with many unable to get an education and facing abuse. She highlighted the importance of recognizing women’s achievements in the male-dominated film industry.

An industry veteran who has worked with director Martin Scorsese for over 40 years, Schoonmaker said she has seen women take on increasingly important roles in the business. “There are so many women executives in Hollywood now it’s astounding,” she said. “That’s all new, and that’s happened fast.”

Hayek, however, spoke of the need for greater equality: “We’re far behind.…Many more men are supported in business. Women are afraid they’re not going to be taken seriously,” she said.

Chicago native Marling, who was at the Venice festival for the first time, spoke enthusiastically of the gathering.

“Women who find themselves in positions of power don’t always think to turn around and help other women.…It’s really cool to put the spotlight on that,” she said.

The following night, Gucci held a cocktail and dinner party for the launch of its new fragrance, Gucci Première. Di Marco and Giannini joined actress Blake Lively, director Nicolas Winding Refn and Procter & Gamble Prestige vice president Luigi Feola in welcoming the guests. Lively, the face of the fragrance’s ad campaign, flew in for the event, and was set to jet back to New York the following day to work on the final season of “Gossip Girl.” “Venice is such a beautiful, beautiful place,” said the actress, who wore a sleeveless red Gucci cocktail dress and burgundy python sandals. “You feel like you should wear a ballgown everywhere.”

Separately, Gucci funded the restoration of Italian director Francesco Rosi’s classic 1972 film “Il caso Mattei” (“The Mattei Affair”) with Scorsese’s The Film Foundation and ENI, the Italian oil and gas company. The fashion house began its partnership with Scorsese’s foundation in 2006, and its eighth and most recent project premiered Friday in Lido’s Sala Grande, where Rosi accepted a Golden Lion for his career in cinema.

The nearly 90-year-old director was greeted with thunderous applause by a diverse audience that included politicians Furio Colombo — who appears in the film — Francesco Rutelli and judge Antonio Ingroia, whose work fighting the mafia was particularly relevant given the film’s focus on the mysterious plane crash that killed Enrico Mattei, the former ENI president who was charged with developing the Italian economy after World War II. The film opened with a personal video message from Scorsese to Rosi, in which the American director praised his longtime friend for creating enriching films that attack abuses of power while revealing a deep love for Italy.