Gucci toasted the renovation of its flagship Rue Royale store with a cocktail and dinner attended by a glittering cast of A-listers and socialites. 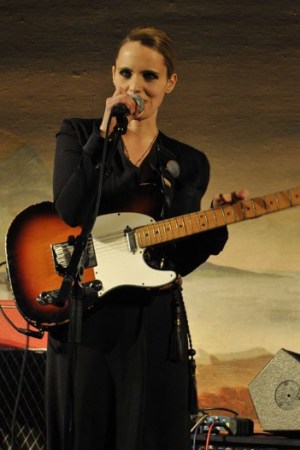 G-FORCE: Gucci toasted the renovation of its Rue Royale flagship with cocktails and dinner that marked couture week’s first appearance by Carine Roitfeld, who hosted the event for Gucci creative director Frida Giannini. Roitfeld said she has finished her decadelong career as editor in chief of French Vogue and put to bed the March book. “It’s a big issue. I’m happy,” she beamed, noting she tallied the number of magazines she oversaw during her tenure: 101.

PPR chairman and chief executive officer François-Henri Pinault and Gucci ceo Patrizio di Marco drank Champagne on the store’s mezzanine with a glittering cast of A-listers and socialites. Diane Kruger said she will portray Marie Antoinette in “Farewell, My Queen” opposite Gérard Depardieu. Yasmin Le Bon, in town with model daughter Amber, is giving her pooches the deluxe treatment by developing a line of dog accessories for brand Mungo & Maud. Jessica Alba, in a one-of-a-kind Gucci silver sequined cocktail dress, will star in the upcoming “Spy Kids 4: All the Time in the World” — her third movie with director Robert Rodriguez — but blushed at the suggestion that she was becoming his unofficial muse. “I don’t know. We’re close friends and I adore him,” she demurred.

“Tron: Legacy” actress Olivia Wilde has so many film projects on the go, it’s a wonder she can keep them straight. She’s currently filming “Welcome to People” opposite Chris Pine — “I play his girlfriend. It’s a family drama,” she noted — and has wrapped other movies opposite a host of hunks: Ryan Reynolds, Hugh Jackman and Daniel Craig, the latter in the forthcoming “Cowboys & Aliens.” Is Wilde from the Wild West or outer space? “I can’t tell you,” she teased.

Bond Girl Gemma Arterton, meanwhile, is heading to Berlin to star as Gretel in “Hansel and Gretel: Witch Hunters,” a twisted take on the fairy tale by Norwegian director Tommy Wirkola. “It’s very undercover,” she murmured.

Delphine Chanéac was taking a breather after completing “For the Love of Money,” in which her character has five children in 10 years. “Nobody on set could remember whether I was supposed to have a big belly or a small belly,” she laughed. Budding model Tali Lennox, the daughter of singer Annie Lennox, was stopping off in Paris en route to New York for castings. “It’s the first time I’m doing New York Fashion Week, so it’s going to be really intense,” she predicted.

Later, guests moved on to the gilded splendor of the Italian ambassador’s residence for a lavish dinner and concert by up-and-coming British singer Anna Calvi. Laetitia Casta, poured into a Giambattista Valli gown, said she plays the murderous mistress in a new movie about Edouard Stern — the French banker found shot dead encased in a latex catsuit in a Geneva apartment in 2005 — directed by actress Hélène Fillières. Casta is nominated for a César for her portrayal of Brigitte Bardot in “Gainsbourg,” but has yet to choose her dress for the Feb. 25 ceremony.