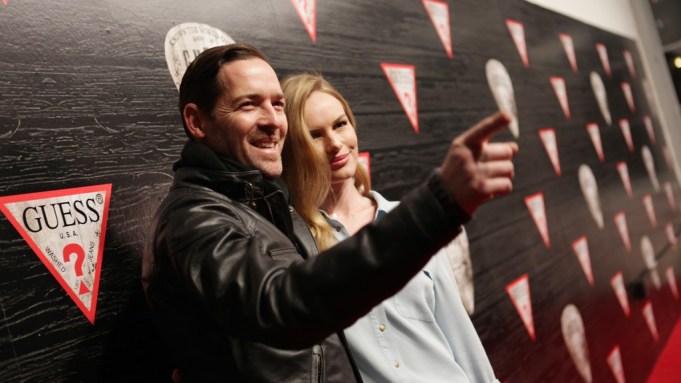 Kate Bosworth made her first New York Fashion Week appearance wearing what is commonly referred to as a “Canadian tuxedo.” The denim-clad starlet was in town for the day and sitting in the VIP area of Guess’ fashion week bash, held at Center 548. “I’ve always been partial to denim my whole life,” she said. “It’s always been part of my wardrobe. Guess is iconic in that way.”

Bosworth was in the city on business, dealing with pre-production matters for her upcoming film, “Still Alice,” costarring Julianne Moore, Alec Baldwin and Kristen Stewart. “I’ve known Julianne for 11 years and she’s just extraordinary,” she gushed. “She’s really someone that I look up to.”

Exchanging a look of relief with husband Michael Polish, Bosworth explained that they’d thankfully be flying out before Thursday’s predicted blizzard. In pursuit of warmer temperatures, she’d be missing the tail end of Lincoln Center festivities. “I’ve been watching from the sidelines,” she said. Any favorites so far? “When is the Proenza show? I always wait for their show. They are my favorites, you know? They are such a dynamic duo. They compete with themselves,” She paused. “What shows have you liked?”

Luckily, Bosworth had a bevy of front-row regulars to compare notes with. Anna Kendrick — in the running for front-row ubiquitor this time around — made a quick appearance before ducking out, presumably to get some rest before another day full of shows. The packed New York schedule had already taken its toll on Holland Roden, who gamely walked the red carpet despite having no voice. “I was fine, but then I went home [after Naeem Khan] and I was like, ‘Oh, no,’” she said in her hoarse voice.

After making appearances in the front row for the past few seasons, Joe Jonas had gone professional with it this time, taking on a writing gig for The Cut. “I just try to be as honest as I can,” he said. “I’ve become friends with all the designers, but you still have to be really honest.

“My favorite shows so far are General Idea — I can’t wait to book my flight to Korea. Public School — friends of mine, I’m really happy for those guys. I think they did it right. Lacoste — I was surprisingly happy. I think the single-tone color outfits were great. Richard Chai killed it.”

Other guests included Jamie Chung, Stephanie Scott, Uzo Aduba, Tiësto and model Gigi Hadid. The 18-year-old, whose mother, Yolanda Foster, stars on “The Real Housewives of Beverly Hills,” was celebrating her first fashion week by going out on a school night. “I’m a full-time student at the New School,” she said. “I’m studying criminal psychology.”

The evening culminated with a brief fashion show and performance by Cold War Kids. While the band set up on the stage, a shadowy, hooded figure appeared. Jared Leto had arrived. The Oscar nominee, shielded by several layers, including a flannel shirt tied haphazardly around his waist, went largely unnoticed during his short stay. After watching the indie band’s five-song set from the VIP area, Leto shared a quick hello with Jonas before drifting off into the night just as mysteriously as he had materialized.