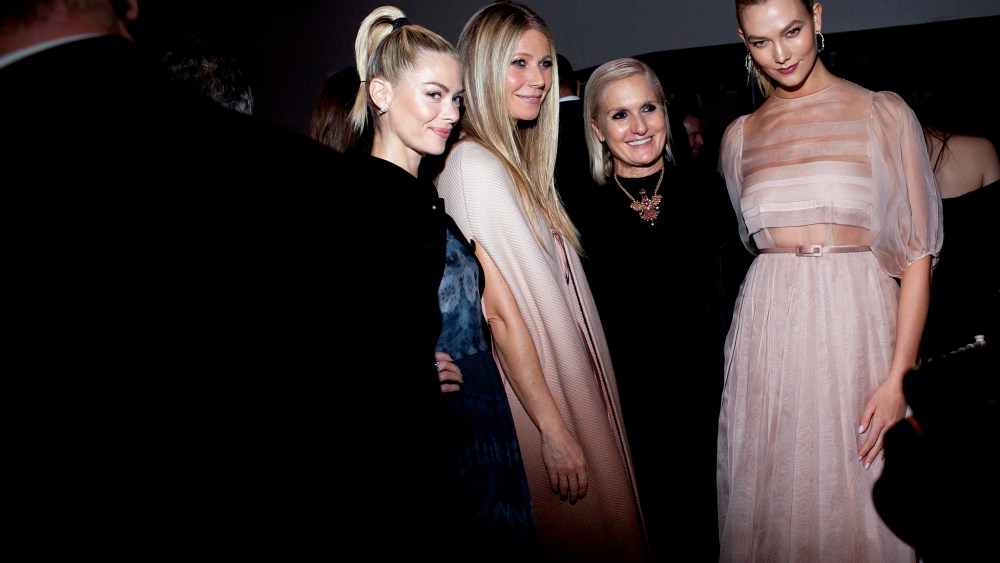 It’s crucial to set the scene for Thursday night’s Guggenheim International Gala: A few inches of wet snow blanketed New York starting in the afternoon, leading to massive transportation delays all around town. Which is all to say, guests got there when they got there, and didn’t let it dampen the evening festivities.

“I just arrived from Shanghai, but it took me more time to come from 57th to 89th,” Dior president Pietro Beccari told the crowd during his dinner speech.

While the GIG pre-party the night before catered to the younger set, the Guggenheim International Gala is, as Beccari put it, for “the more traditional crowd.” The evening honored philanthropists Alice Walton and Dimitris Daskalopoulos, and before dinner, Walton shared her first Guggenheim memory with the crowd from the museum’s basement theater.

“Our family home was built by a young architect at the time named E. Fay Jones, who happened to be a student of Frank Lloyd Wright,” said the Arkansas native. “And Fay was a good friend of our family’s so I heard about Frank Lloyd Wright all during my childhood. We finally made my first trip to New York when I was about eight or 10, and one of the first things we did was come by the Guggenheim so that we could see Frank Lloyd Wright’s building. I’ve never forgotten my first view,” she continued. “The Guggenheim has always been a beacon to me, pushing the boundaries and creating access where there was none.”

Both nights of the GIG, which is sponsored by Dior, featured musical performances; the night before, it was R&B singer Jorja Smith, and Thursday’s crowd took in a new piece by Nico Muhly, in which he created an arrangement based on the oldest written song, the Hurrian Hymn, which at more than 3,000 years old had everyone in the room beat.

“This was my first time performing at a museum,” said Smith, who was off-duty for the night and decked in a blush Dior gown. “It’s been incredible — I’ve never done anything like this before, so it’s been fab.”

Nearby, the dressmaker herself, Maria Grazia Chiuri, was ensconced by friends and admirers — including Karlie Kloss and Gwyneth Paltrow, who were both also outfitted in pink tone gowns. After a few days in New York, Chiuri was headed to Denver on Friday, where the brand has staged their exhibition “Dior: From Paris to the World.” The creative director noted that art was very close to Mr. Dior’s heart. “There is a big connection between art and our tenure,” she added.

Indeed: before the late couturier was a fashion designer, he owned a small art gallery.

“Dior is a very natural partner for a really important art museum in the world,” Beccari said, before taking his seat for dinner in the rotunda. “I think by doing so, we are just following in the steps of Mr. Dior.”

Once at the table, Beccari fell into conversation with Paltrow and Jaime King, and the two actresses passed smartphones back and forth showing photos of their children. Between courses, King admired the fantastical Dior fine jewelry she had on almost every finger. “I have to give them back,” she sighed about the borrowed baubles.

King’s hubby, filmmaker Kyle Newman, is in the midst of a tour for his first book, “Dungeons and Dragons Art and Arcana: A Visual History.” He described a sharp rise in the fantasy game’s popularity – so much so that he’s now been asked to write an accompanying cookbook.