Guns N’ Roses Ride The Nighttrain Out of Fashion Week 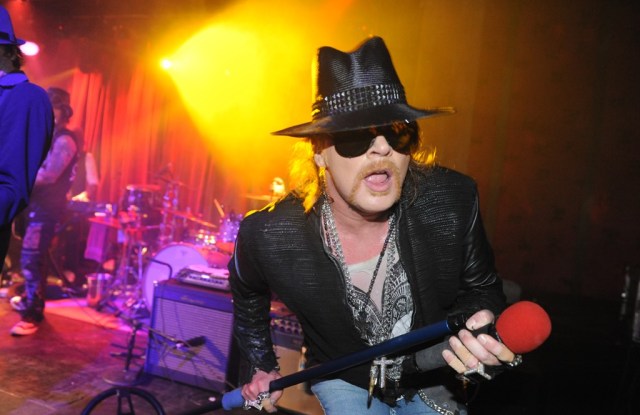 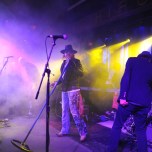 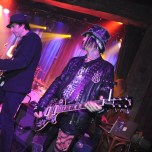 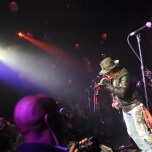 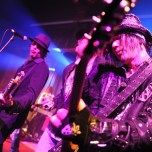 “It’s nice that New York fashion week got a little harder and a little more raw,” said Mia Moretti last night at the Guns ‘N Roses show at Hiro Ballroom at the Maritime Hotel, hosted by DeLeón Tequila as part of Nur Khan’s Electric Sessions. After DJing after parties for the likes of Prabal Gurung and Phillip Lim all week, she was enjoying the night off. “This is a nice finale,” Moretti said. “Brings us back to reality.”

The sentiment among the crowd — a mix of celebrities, models and cool kids including Justin Timberlake, Sienna Miller and Tom Sturridge, Taylor Momsen, Alexandra Richards, Jared Leto, Evan Rachel Wood, Danny Masterson, Mario Sorrenti and the Winklevoss twins — was mixed. There was an exhale of relief that fashion week was over, and then there was overwhelming excitement over the man, the legend: Axl Rose.

“I’m looking so forward to the show,” said Ben Bronfman, the environmentalist and entrepreneur. “And I’m wondering if [Axl’s] gonna have cornrows or no cornrows.”

The man in question, notorious for being hours late on stage, was perfectly punctual (and cornrow-less). “This is like the old days,” said Rose, decked out in studded leather, shades and copious silver jewelry, before breaking into “Welcome to the Jungle,” “It’s So Easy” and “Mr. Brownstone” in a set that went well past 2 a.m. “I can’t hear s–t. And you people are great.”

The venue’s upper level found Chelsea Clinton and her husband Marc Mezvinsky singing along to “Sweet Child O’ Mine” near Matt Damon and wife Luciana Bozán Barroso, while Jason Sudeikis and Olivia Wilde cozied into a booth closer to the stage with Jimmy Fallon and friends.

Despite a performance laden with extravagances like confetti cannons, smoke machines and aerialists in giant fabric swings, it wouldn’t have been a proper rock ’n’ roll show without a scuffle or a tantrum, and the evening contained both. A fight broke out between two men in the crowd minutes before the show started, leaving a trail of blood on the floor as both were whisked away by security.

The band also paused mid-song to shame a member of the audience who had thrown glass onto the stage.

“See ya, wouldn’t wanna be ya,” said Rose, as bandmate Ron “Bumblefoot” Thal ran after the perpetrator. The audience, a sea of camera-phone wielding arms, let out a cheer.