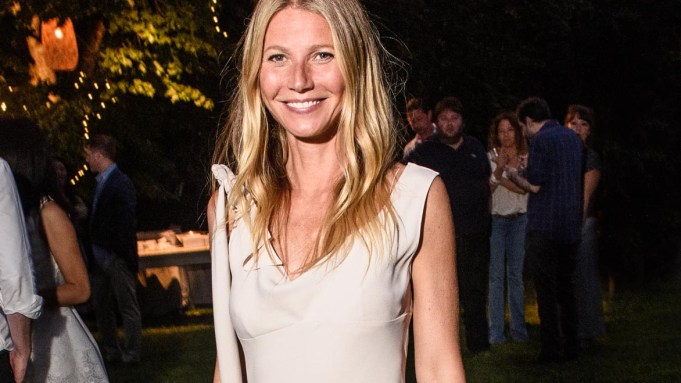 “Well, would you look at that — balloons!” said a woman to her husband as they stepped off a chauffeur-driven golf cart and onto the lawn at Gwyneth Paltrow’s Amagansett home Friday at dusk. Indeed, a string of red balloons hung above the backyard spread, and they were rather fancy ones at that; come dark, the inflations shifted to purple and glowed with a small green light, much to the delight of the Instagram accounts present. Apparently Bill Clinton isn’t the only balloon enthusiast these days.

The occasion? Goop’s summer party, thrown with Net-a-porter for the second year. After a smaller seated dinner last August, this time around that formality was skipped in favor of a larger, more casual evening of cocktails, food and dancing. Paltrow’s children Apple and Moses Martin skirted about with their friends, a seemingly average playdate night for the famous offspring. Chris Martin and Blythe Danner were there, as were Jessica Seinfeld, Molly Sims, Amy Astley, David Neville and Gucci Westman, Jennifer Fisher, Max Osterweis, Olivia Chantecaille, Rachel Zoe and Stacey Bendet.

“There’s so much synergy between our two brands and the woman that we speak to,” said Alison Loehnis, president of Net-a-porter. “We’ve collaborated for about four years now. A lot of the Goop readers are here and a lot of our customers are here. I think right now there is so much going on every day for all of us, so it’s an opportunity to take some time out.”

The unofficial dress code called for the latest garden-ready summer frock from Net-a-porter, naturally — and any variation of a flat shoe. “ I think for a lot of our women it’s the one time of year when she’s in flats consistently,” Loehnis said. “[Hamptons style] is elegant, chic, relaxed, and obviously there are different events, but when I think about it, it’s easy and beachy, and for women who don’t wear much color it’s an opportunity to wear color and celebrate.”

As a string band dissolved into a Top 40 cover set, guests passed between two bars — one dedicated to tequila — and a beer pong table set with rosé. This is the Hamptons, after all. “Will you take a Snapchat?” a young woman asked another guest, positioning herself against the string-light backdrop. “None of that Instagram Stories business.”

“I’ve been coming here pretty much since 1999,” Sims said of her Hamptons routine. “This is, like, the perfect end to summer. It’s not hot, and everyone looks pretty and gorgeous.”

“We don’t venture out of Shelter Island very often, so this is a rare occasion,” Kate Foley said of her and boyfriend Osterweis’ attendance.

With the end of summer looming, the languid East End ritual stood out as an especially stark contrast to the fashion week schedule awaiting many guests. “I think this fashion month is going to be a little bit different than my normal ones, because I’m going to have to get in a lot of training,” Foley added. “I’m doing a half Ironman afterwards.”