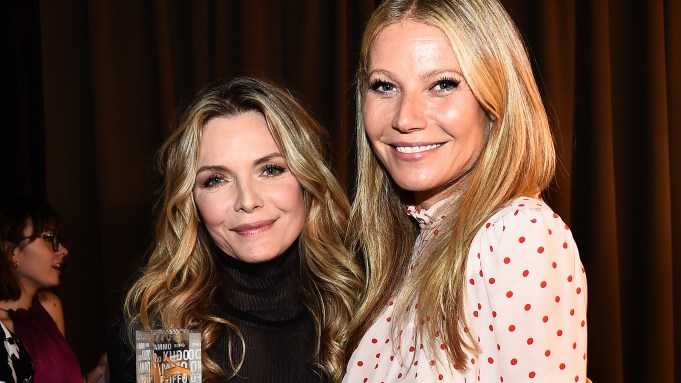 Gwyneth Paltrow was a surprise guest at Variety’s annual Power of Women lunch, presented by Lifetime on Friday at the Beverly Wilshire hotel. Though she didn’t mention the Harvey Weinstein scandal as she introduced honoree Michelle Pfeiffer, she didn’t need to.

It was the topic on everyone’s lips on the red carpet, as host Judd Apatow, one of the first men to publicly condemn Weinstein on social media, told reporters, “It’s a nightmare. When you are young in this industry and trying to get a break and someone preys on you like that and threatens you, I can’t think of anything scarier because really it threatens your entire future.” Apatow’s daughter Maude is a fledgling actress, but he said people don’t need to have daughters to know that Weinstein’s alleged actions are unacceptable.

Inside, he tried to keep the mood light, saying, “It’s easy not to be a creep. I have never given Seth Rogen a massage.”

Chopra acknowledged the systemic harassment endured by women in the entertainment industry, saying, “Women have been told your career will not go forward if you don’t compromise. I was thrown out of movies because I didn’t ‘network,’” she said, making an air quotes gesture. “I commend these brave women to actually call out the injustices that have happened to them because now if you try to silence a woman, that’s not going to happen anymore. That silence will never be seen as OK anymore.”

Clarkson said she was “completely shocked” by the Weinstein story because she lives outside of Hollywood. “But I am always a big supporter of people standing up for themselves. We should take this and teach our children how to treat a women correctly, and our girls how to stand up for yourself and how to know when it’s OK to make someone uncomfortable if you are uncomfortable,” she said.