Stars gathered at Bryan Lourd's home to celebrate his brother Blaine's memoir "Born on the Bayou." 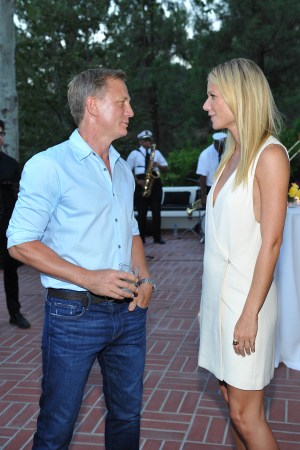 Within Hollywood circles, Blaine Lourd is known as a money manager (and younger brother of Creative Artists Agency partner Bryan Lourd), but lately he’s been getting acclaim as a writer; his first book, titled “Born on the Bayou,” has been the number-one selling memoir for the last four weeks. On Thursday, Bryan and his partner Bruce Bozzi, along with Gwyneth Paltrow, whom he referred to as “our wife,” hosted a book party at their home that drew a crowd of stars including Reese Witherspoon, Daniel Craig, Demi Moore, Tom Ford and Luke Wilson.

“I could not be more proud of him on every level,” said the elder Lourd. “I knew what he was writing about but this is completely his story. He’s an exceptional writer. That was probably the biggest surprise, that he’s so skilled and gifted.”

The memoir details the Lourd’s upbringing in rural Louisiana, where their family’s fortunes changed overnight during the oil boom of the Seventies. Blaine said he decided to write his story after undergoing a triple bypass in 2007. “I went from being a young man into midlife with the surgery and I also realized that my life in California was never going to be anything like my life in Louisiana and my boys were never going to know that, so I wanted to write about what it was like. But it’s a story that everyone can grab onto because it’s about family. For me coming of age is really seeing your parents for human beings that have their own disappointments and heartaches and faults.”

Blaine called his older brother “my hero and my Moses” but not his agent. “No, we kept it all independent. He did everything himself,” said Bryan. Blaine gave his manuscript to pal Angela Janklow, who give it to her father Mort, who said, “I bet it’s a piece of crap like all the other things I get from Angela’s friends,” but he gave it to Janklow & Nesbit agent Richard Morris and Lourd eventually landed deal at Simon & Schuster after rejections from several other publishers.

“Blaine is very smart,” said Mossimo Guannulli. His wife Lori Loughlin added, “I read the book and he is great at painting a picture.” “I can’t wait to read it,” said Ford, who declined to reveal details for his next show. Of his next film, he would only cross his fingers and say, “It’s going well.”

Ever the behind-the-scenes party planner, Blaine’s wife Crystal Lourd ensured the party stayed lively with a New Orleans brass band and friends from near and far that included Nacho Figueras and wife Delfina Blaquier, who stayed in California an extra day before heading back to Argentina. As guests stood patiently in line waiting for signed copies, Crystal noted, “He’s a businessman by trade but he’s a writer at heart, and he will always be a Southerner. It’s in his blood.”