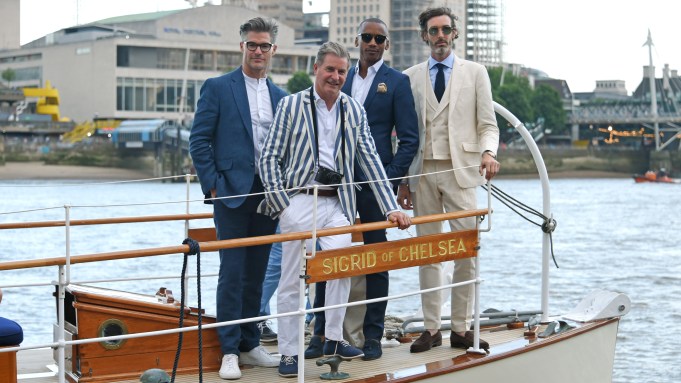 BOOZE CRUISE — Jeremy Hackett celebrated becoming the first-ever apparel sponsor for the historic Henley Royal Regatta with a booze cruise during London Fashion Week Men’s. The annual 178-year-old tournament is best described as rowing’s answer to Royal Ascot, with an equally strict dress code in the official precincts of the event — and many a former public schooler squeezing into his old boldly striped team blazer.

“This is why I don’t live in London,” he said, eyeing the clouds with deep suspicion. “If this was L.A. right now, we’d all be rugged up in padded coats and big scarves, but you guys are all, ‘This is summer!'”

Weitz, a regular at the London men’s shows, is going to Milan and Israel before heading home to wife Stacey, who is expecting twins later this year. “I won’t be dressing them in mini Gucci polo shirts or anything, but what I want my kids to grow up thinking is, ‘My father is an impeccable dresser. He likes to look good and loves helping people, loves helping men find their personal style, helping them in their business and their professional lives,'” he told WWD after the brief — even for London standards — drizzle. “That’s what I do. I’m not the fashion guy, I’m not a designer, I ain’t gone to fashion school. I just love helping people through style; helping them to understand that in this [film] business world, style really does matter.”

Underwood was excited to be heading to Brisbane, Australia, later this month to perform in “Woolf Works,” an Olivier Award-winning performance inspired by the writings of Virginia Woolf. “I haven’t been to Australia before, so I’m really looking forward to that. It’s the first time the Royal Ballet has been to Queensland in 15 years,” he said. “I have a few days free there so I want to explore a bit of the country.”

Burly former rugby player McGinlay is starring in “King Arthur: Legend of the Sword,” Guy Ritchie’s latest blockbuster that’s in cinemas now but has been a flop at the box office, playing a character called Percival — one of the good guys. Swords and armor seem to be McGinlay’s niche: “I really enjoyed playing the baddie in ‘Knightfall,'” he confided, adding that he spent time in Croatia filming the role last year. “It’s a television drama about the last days of the Templar knights that will be airing on The History Channel later this year. It was an interesting challenge.”

The deal between Hackett and Henley is a natural progression from the brand’s longtime support of England’s other big rowing event, affectionately known simply as The Boat Race, an annual competition on the Thames in London between the Oxford and Cambridge rowing teams. The brand will be providing attire for the stewards and Henley representatives throughout the regatta, which runs from June 28 to July 2.

The brand has also developed a capsule collection inspired by the partnership. The Hackett Henley Collection pays homage to the thick striped flannel jackets of the past, which evolved as rowers needed to remain warm during chilly mornings on the Thames, and tended to wear the now-iconic stripes so as be easily identified by spectators watching from the riverbanks. The collection also includes striped and plain cotton shirts, navy and striped blazers, striped and white chinos, and is available in select Hackett stores and a pop-up Hackett shop during the regatta.

Hackett himself was never much of a rower. “Actually, the one and only time I have ever been rowing was with [British Olympic rowing champion] Sir Steve Redgrave,” he said. “We got in a double scull and rowed up the Thames in Henley for a shoot for this launch. That’s quite a good name-drop isn’t it?”