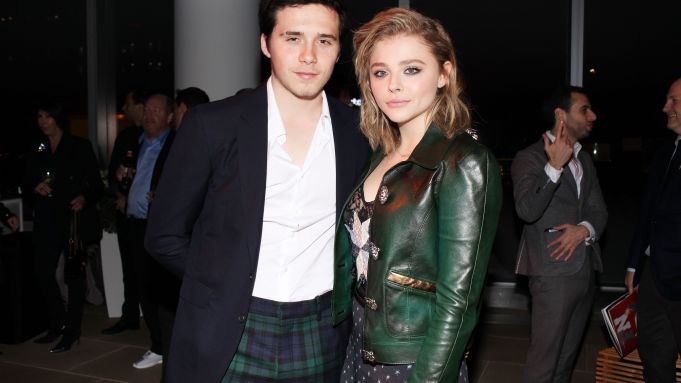 Monday night’s Gotham Awards may have kicked off awards season, but the entertainment industry isn’t the only one in on the fun. Footwear News hosted its annual Achievement Awards at the IAC Headquarters Tuesday evening, honoring the footwear industry’s biggest players with a ceremony that has come to be known as the Shoe Oscars.

“I’m very happy that [Footwear News] would recognize my style and my everyday streetwear as awardable,” said Hailey Baldwin, FN’s Style Influencer of the Year. Fresh off of what — according to Instagram — appears to have been a vacation with friends Kendall Jenner and Bella Hadid, Baldwin threw her hair up in a high ponytail and donned a head to toe Fendi ensemble for the night.

“I look to a lot of different people [for style inspiration],” she continued. “I love Rihanna, I think she’s amazing. I love Victoria Beckham. I look back on a lot of old models from the Nineties, what they were wearing, what was cool then.”

Singer Justine Skye was on hand to support Baldwin and gush about her “fly” style. “First of all, it doesn’t matter where she’s going. She could be going to throw her garbage out, she’s always looking fly,” Skye said. “It’s annoying. It’s honestly super, super annoying. She has an outfit for everything she does. Can’t knock her for it. She’s a model. It’s her job.”

Virgil Abloh picked up Shoe of the Year for his reinterpretation of Nike’s Air Jordan 1. The sneaker, part of Abloh and Nike’s “The Ten” collaboration, is one of the year’s most talked-about — and exclusive — releases. “I don’t pay attention to [the hype], but I do notice it in my periphery,” Abloh shared. “To me, it’s exciting. It adds to the halo effect around it, but it doesn’t affect my decision-making or my passion. I’ve always been focused on creative output. It’s cool, but it’s not the end goal at all.”

There to present him with his honor was Heron Preston, who met Abloh online about 10 years ago. “It was a discussion board for streetwear and clothes and culture,” Heron explained. “We had blogs, we were kind of writing about the same thing.”

“I wish I had kept the first pair of shoes that I wore,” Stan Smith, recipient of the Manolo Blahnik Lifetime Achievement Award, admitted. “I thought it might be a two- or three- or four-year arrangement and that would be it. But it’s been time-tested over the years, that’s for sure.” The tennis star and shoe icon added that he and Adidas are “on the way” to renewing their contract: “It might be a lifetime deal, who knows.”

Company of the Year recipient Steve Madden said he wasn’t sure his company was worthy of the honor. “Company of the year, you know, I don’t really think we deserve it. I’m sure there’s other companies better,” he shared. “We try to focus on making cool shoes, taking care of our customers, being good to our employees, that’s what we worry about.”

His brand has recently partnered with Cardi B, who Madden admires. “Cardi’s a very self-made woman,” he said of the Grammy-nominated rapper. “I’m into the whole self-made trip. We admire her, we admire what she’s doing with her life. I’m like the male version of Cardi B.”