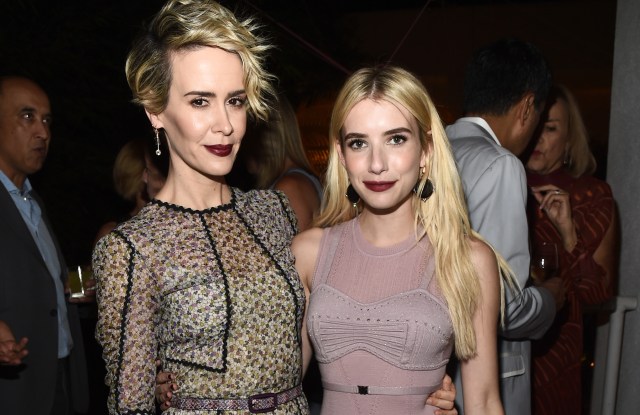 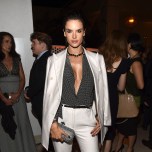 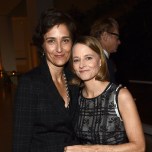 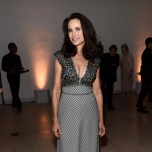 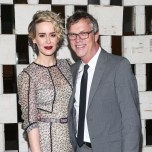 “We come because it’s fun,” said Jodie Foster, who co-chaired this year’s Hammer Museum Gala in the Garden, honoring Laurie Anderson and Todd Haynes, with partner Alexandra Hedison. “We don’t go out very much, so it’s got to be a good time.”

January Jones was among the first to show up, saying, “I live so far away that I’m either really early or really late.” Along with Jones, there were a battery of Bottega Veneta-clad actresses — Emma Roberts, Laura Dern, Amanda Peet, Andie MacDowell, Minnie Driver, Mamie Gummer and Isabel Lucas — because the house has supported the gala for four years running.

As he walked onto the second-level gallery, where guests basked in a rosy glow of tinted lights, Bottega creative director and gala co-chair Tomas Maier noted, “It does feel more intimate; we are like family now.” He was referring to his relationship with the museum and the women.

Hammer gala regular Tom Ford was also part of the family, saying he comes to support the museum and its director Ann Philbin. He missed last year’s event because he was making his second movie, “Nocturnal Animals,” which costars Armie Hammer, whose grandfather and namesake founded the museum.

“We choose people who have made an impression on us in the last year for one reason or another, and obviously, Todd had just done ‘Carol’ and Laurie just did a remarkable show at The Armory in New York. It just seemed right to do these two people who are so admired by [other] artists,” said Philbin, who was also charged with securing the presenters — actress Sarah Paulson for Haynes and author Karl Ove Knausgaard for Anderson.

“I was very surprised to be asked,” admitted Knausgaard. “I’ve never done something like this before. I said yes because I have been a fan of hers since the Eighties. I just immersed myself in her work and sat down to write my speech.” The author said he met Anderson for the first time the night before. “She’s very wise and very literary. But we didn’t discuss my work at all.”

As the towering author leaned over the podium, he gave Anderson an eloquent and personal tribute, recalling how he first heard her voice as a child in Norway, listening to his brother’s “O Superman” record.

Anderson eschewed the traditional acceptance speech in favor of a performance art piece in which she played the violin and her own electronic music soundtrack to accompany her spoken words. Those included an anecdote about her schoolgirl correspondence with then-Sen. John F. Kennedy as well as commentary about the current election.

Despite having to follow two auteurs, Paulson held her own in presenting Haynes, who directed her in “Carol.” Her heavily researched tribute included interviews with his family and anecdotes from his leading ladies Kate Winslet, Cate Blanchett and Julianne Moore. A visibly moved Haynes said the 10-minute speech left him “gobsmacked.”

Rufus Wainwright, whose performance closed the evening, said earlier, “I like to take the temperature of the evening before I choose my weapon” Fittingly, he performed his song “The Art Teacher.”