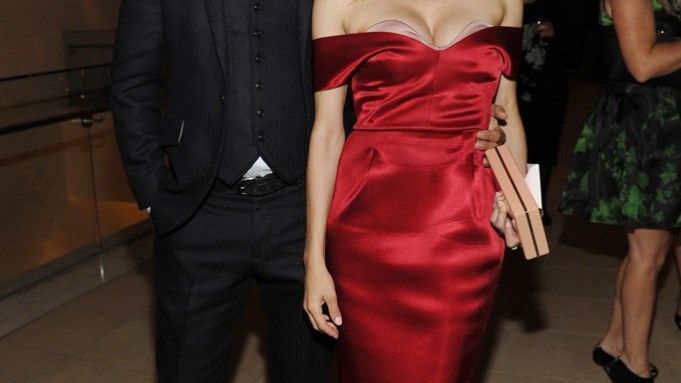 Rita Wilson and Tom Hanks were listed on the program as hosts, though the latter couldn’t make it. Stand-in Will Ferrell took the stage with his “wife” for opening remarks, never breaking character as he repeatedly reminded people, “Go see my next film, ‘Captain Phillips,’ out October 11.”

Guests were allowed a moment to enjoy their Lucques-catered dinner before Viola Davis stepped on stage, removed her shoes and introduced Kushner, whom she met 21 years ago when he was a playwright-in-residence at Juilliard and she was a third-year student. Davis recalled the meeting as “not going well,” but Kushner had nothing but praise for the actress.

“There is no actor I want to write for more than Viola Davis. When she acts, art occurs,” he said, before joking, “It’s so nice to fly to L.A. for an award I’m 100 percent certain I’m going to win.” What followed was a six-minute monologue so densely worded and entertaining that it could only have been written by a Tony-award-winning playwright.

On his way to the podium to accept his honor from artist Charles Ray, Gober said, “I turned to Charlie, who was sitting next to me, after hearing Viola Davis and Tony Kushner and said, ‘We’re screwed.’”