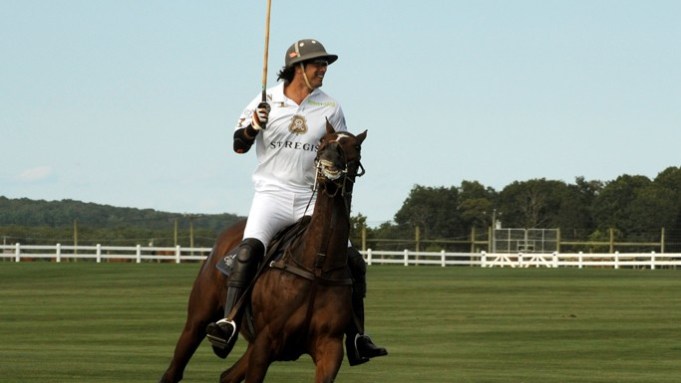 The perfume of several hundred Yves Piaget hybrid tea roses lay heavily on the breeze that wafted across the expansive rolling green of the Equuleus Polo Club in Watermill, N.Y., on Sunday at the second annual Piaget Hamptons Cup polo match to benefit the Robin Hood Foundation. A pair of comely trainers exercised two geldings on the pitch, windmilling their mallets against the bright blue sky as guests like Donna Karan, Heather Mnuchin, Eric Ripert, Jean Shafiroff, Simone Levinson, Kelly Klein and Olivia Chantecaille began to arrive in an array of what one partygoer called “bull-market garden party chic.”

“As soon as the kids’ last day of school had passed, I was like, ‘We’re going!’” Mnuchin said, having returned to the East Coast from Los Angeles for the summer months. “You could not have even imagined a more beautiful day,” she added.

“There are a lot of stereotypes about polo,” Diana DiMenna said of the “sport of kings.” She made her way from the hedge-lined entrance of her family’s private polo club towards the stark white spectators’ seats labeled for the families and companies that had cochaired the event: Mary-Kathryn and Alex Navab, Lise Evans, Ralph Lauren, Town & Country, Credit Suisse. A florist was kneeling over a nearly life-size man-and-horse-shaped metal stencil, methodically filling it with plushly swollen hot-to-mid-mauve-pink roses. (“They’re a hybrid between a rose and a peony and are really extremely fragrant,” Piaget North America president Larry Boland said of the blooms, which had inspired one of the jewelry collections on display at the event and, like several of the players, were recent South American imports.)

“It is the most wholesome sport you can imagine,” Diana DiMenna continued, noting that the only time the farm was open to the public was for the Robin Hood event, which raised some $425,000 in 2012, and was set to raise more than $600,000 this year to combat poverty in New York. “It’s nothing to do with Champagne and hats, this is about the summer, being with your family and with the animals, being together and outside in the sun,” said DiMenna.

Karan made a beeline for Gianpaolo de Felice, clutching her son-in-law in an embrace. “It’s a no-win situation! His wife gets mad at me, and I can’t find anyone because of him,” Karan cried. De Felice was on hand with his Gotham Jets cofounder, Millie Becker. The private jet brokerage firm had arranged helicopter travel to and from the event for some of the guests.

“This event was Nacho [Figueras’] idea, so if you have a good time you can thank him, and if you hate it you can blame him,” Diana DiMenna said. Figueras, a Ralph Lauren model and recently appointed ambassador to the charity Sentebale, became involved with the Robin Hood Foundation after buying lemonade from DiMenna’s children at a Robin Hood-sponsored “lemon-aid” stand in Southampton, N.Y., a few summers ago. “[Nacho] was a customer and then hopped behind [the stand], put on a branded T-shirt, tweeted a picture and his location and caused a riot,” DiMenna said.

It was Figueras’ last bout for St. Regis at the Cowdray Park Polo Club in West Sussex, England, in May that had resulted in his fractured pelvis after his horse fell on top of him, a fact that had some reps from the hotel chain notably concerned about the polo star’s health.

The Piaget Hamptons Cup would be the first time that Figueras would ride with a mallet in his hand since the accident, and he helped his team defeat Credit Suisse.

“I told him not to be a hero,” Joe DiMenna said of his St. Regis teammate, “but he says he’s ready. I told him, ‘People would probably be happier if you were on the sidelines mingling with the crowd anyway.’”