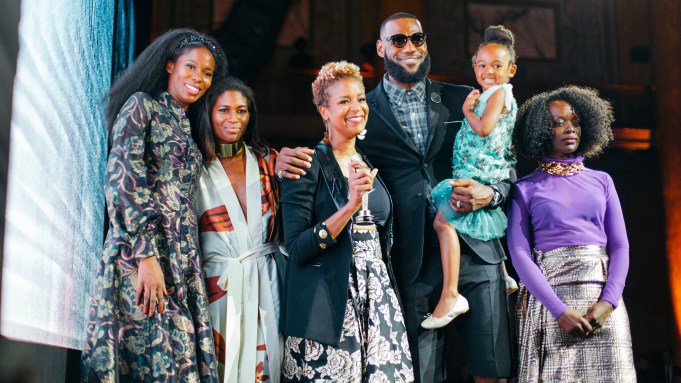 On Tuesday night at Harlem Fashion Row’s Style Awards and Fashion Show, Brandice Daniel, HFR’s chief executive officer and founder, revealed that LeBron James had collaborated with three Harlem Fashion Row designers on his first women’s basketball shoe with Nike. The HFR x LeBron 16 was co-designed with Fe Noel, Undra Celeste and Kimberly Goldson, all of whom presented mini fashion shows during the awards ceremony, which was held at Capitale.

For the first time in its 11-year history, HFR’s Style Awards and Fashion Show was sponsored by Nike and James. The dress code was black tie and Nikes and most of the crowd appeared to comply. Daniels recruited an impressive roster — almost more impressive was the fact that she organized an awards ceremony that clocked in under an hour and a half and included four fashion presentations and a two-course dinner. The four awards went to Jason Rembert for Stylist of the Year; Bethann Hardison, who received the Trailblazer Award; Dapper Dan, who received the Lifetime Maverick Award, and James, who brought his daughter Zhuri onstage to accept the Icon 360 Award.

For his part, James thanked the women in his life — his mother Gloria, his wife Savannah and his daughter — for being examples of how African American women are the most powerful in the world, and finished his speech with his thoughts on Nike, alluding to its controversial Colin Kaepernick campaign. “Last but not least, I stand for anybody that believes in change,” said James. “I stand for anybody who believes in a positive attitude and a positive manner, and I believe in and I stand with Nike every day, all day.”

On Wednesday the designers met with press at Nike’s New York headquarters to explain how the project came together and outline the sneaker’s design. They worked as a collective with Meline Khatachourian, a Nike global basketball footwear designer, to create a shoe that echoed James’ sentiments about black women and strength. The three designers were selected from a group of submissions that Daniel sent to James and his team.

“What touched us is how important it was for LeBron to hear our stories,” said Noel. “We all really felt how much he cared.”

The shoe is the first James sneaker designed by an all-female collective. While each of the designers has a different aesthetic, they all agreed they wanted gold to be a prominent part of the shoe, which builds on the LeBron 15 Flyknit design but features grommets and hardware that doubles as a bracelet or choker. The sneaker, which comes in an ivory colorway, also includes a 3D-sculpted lion on the back that allows the laces to tie up the ankle. The interior is inscribed with the designers’ signatures and words including dignity, loyalty, courage and strength. It will be available to purchase on Sept. 7 and retails for $200. It will come in sizes 5 through 12.

Each of the designers is based in Brooklyn and produces contemporary womenswear. They’ve all been previously involved with Harlem Fashion Row and commended James and Daniel for offering them a platform.

“Brandice should change her name to Saint Brandice,” said Celeste. “My first time showing at fashion week was with Harlem Fashion Row and that visibility leads to more Web views and more sales. They have given us a platform and a level of access that’s priceless.”