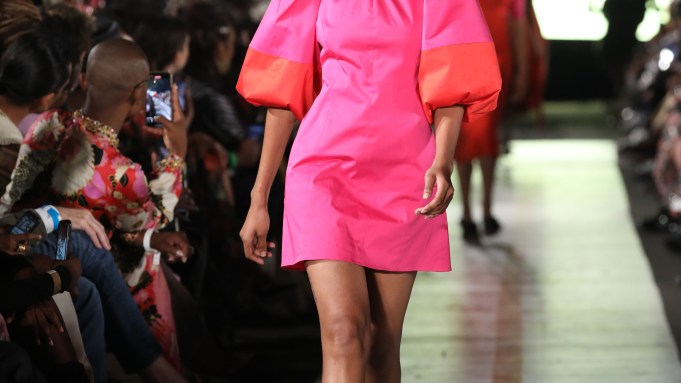 Using a hybrid in-person and virtual experience — Banana Republic was the sponsor for the in-person event while Stitch Fix sponsored the virtual one — HFR took over a Harlem city block with the theme of the night, Renaissance Forever, to shed light on the culture, community and individuality that pulses through the uptown neighborhood’s  streets.

Winners chronicled both their stories and challenges of being Black in fashion, with Kebede recalling that when she came to New York no agency would take a chance on her “because they had one Black model already.” There were joys, too, such as Leiba’s tale about putting the first Black face on the cover of Harper’s Bazaar. Each spoke about their hope for the generation of Black creatives currently writing the next chapter. It was a powerful beginning to the night, with a few tears and standing ovations.

Rounding out the evening were four runway shows from emerging Black designers. Charles Harbison presented looks from his sustainable collection, created with Banana Republic. Brightly colored with a take on knit color blocking, the capsule collection will hit retail in October.

Sean Penn is a seasoned industry executive, having worked at Valentino and Balmain, and he launched his new label June 79 just eight weeks before the HFR show. Penn aims to dress a new modern man, and proposed a mix of tailored bombers, pants and cardigans in monochromatic colorways and subtle plaids.

Johnathan Hayden sent down a host of dreamy dresses and abstract floral print pieces, his models slowly walking the runway to show off his textures and embroideries to a work by composer Ellen Reid.

Nigeria Ealey, Esaïe Jean Simon and Victor James, founders of Tier, showed the next chapter of their fall collection starting with their abstract take on camouflage, and continuing with mesh dresses, leather trousers and sleek cargos.

Harbison was back to close the show with his signature collection, starting with a mix of silver and bronze metallics, followed by a mix of loose trousers, shirting with midriff-baring slits and easy dresses with detached sleeves.

Committed to empowering the next generation of artists and creatives, Crown Royal Regal Apple collaborated with HFR’s 501(c)(3) nonprofit, ICON360, to awarding all four designers $10,000 grants.

“I’ve always said HFR is more than a show, it’s a movement,” founder Brandice Daniels said, which was met with a roar from the crowd.