Katy Perry performed and gave a shoutout to Mariah Carey sitting in the audience Wednesday night. 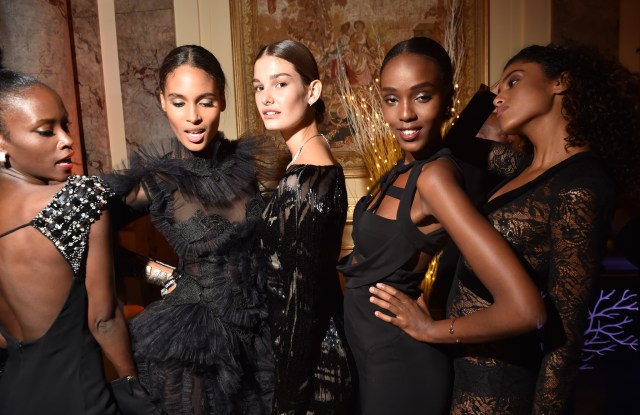 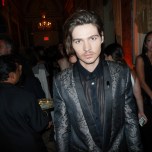 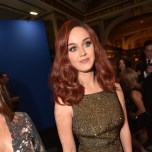 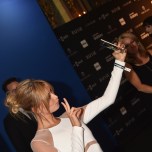 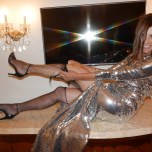 It’s a lot to ask to throw a major bash (a black-tie bash, no less) on the Wednesday night of New York Fashion Week. Post-Proenza Schouler, the light at the end of the tunnel is practically blinding, and all the fashion flock truly desire is a warm meal, Netflix and — whether they’ll admit it or not — sweats.

Despite the early call times and countless castings, it was the model contingent that made up a majority of the crowd, towering over regular folk and sipping from wineglasses filled with Dom Pérignon. Among them: Alessandra Ambrosio, Andreja Pejić, Lucky Blue Smith, Suki Waterhouse, Hailey Baldwin, Nina Agdal, Liu Wen, Taylor Hill, Hilary Rhoda, Toni Garrn, Hari Nef, Hanne Gaby Odiele, Devon Windsor, Jessica Hart and Binx Walton — Walton all that much taller thanks to a pair Alexander Wang moon boots from last season. “Yeah. F–k yeah,” she said when asked if they were actually comfortable. She capitalized on those few extra inches of platform to spot a group of male friends, who quickly made their way over, jumping all over the model and shouting about, curiously, chicken nuggets. “Sorry — they really like fried chicken,” she offered with a shrug.

If Walton is the poster child for consummately chic, tomboyish models of the moment, Kate Upton is her antithesis. The blonde slithered down the carpet in a low-cut Stella McCartney frock. “I really loved the neckline,” she said. Most males in attendance did as well. “I have been looking forward to this party. It’s kind of bittersweet because it’s the end [of fashion week], but it’s a good time.”

Then, of course, there was the “It” girl trifecta — Kendall, Gigi and Bella — mugging it up for the cameras with a flurry of kissy lips, thrusted hips and interlocked arms. Jenner and Gigi quickly rushed inside once the flashes stopped, while the younger Hadid lingered, relishing in her first fashion week. “It’s amazing,” she gushed. “I’ve been walking in all of these shows and I feel really blessed.” Any favorites? “They’ve all been really great. Jeremy Scott was amazing. And DVF [Diane von Furstenberg] — I was made up exactly like Diane, so…”

Once the Millennials cleared, it was time for someone who has seen her fair share of fashion parties to make her way through the crowd: Mariah Carey was in the house. The singer, who is featured in the magazine’s editorial, made the press line her own personal runway show, dutifully posing for a number of photographers before stopping at the Samsung Galaxy (a key sponsor of the evening) branded photo booth. “I’m not sure what to do,” she said, preening for the camera. “That’s not true,” chided a handler before whisking her away to a private area.

With Carey secured, it was time for the main draw of the evening: an acoustic performance by Katy Perry. Though Mimi never emerged from her VIP seat during the five-song set (surely she could handle the Juicy J hook on “Dark Horse”), Perry made sure to give her a shout-out in between songs. “Mariah, this is for you….You’ve paved the way for so many of us, and now you can just sit back,” she said, before launching into “I Kissed a Girl.”

Perry was only warming up with her between-song banter. “I always feel like an outcast during fashion week because I’m no longer sample size…a stitch here, a stitch here, it’s couture.” The mostly sample-size crowd giggled nervously.

It was, of course, her way of segueing into the outcast anthem of the past decade, “Firework.” “I want you to remember this song when you have a bad day, you had two Band-Aids rip off of the back of your heel, you’re sweating, and there’s coffee on your blouse — I’m talking to all the assistants here.” Another nervous giggle — it was only 11 p.m., and all the assistants were surely still in the office. After all, we still have three more cities to go.