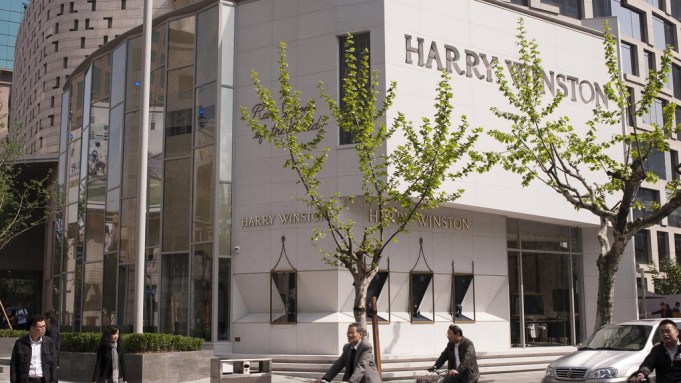 There’s a good chance that Harry Winston may go down in history here on the Mainland as the first brand to give Chinese an up close and personal encounter with none other than Chuck Bass and Blair Waldorf of “Gossip Girl.”

The jeweler celebrated the opening of its first freestanding pavilion in Shanghai Friday and flew over Ed Westwick and Leighton Meester, actors who play Chuck and Blair on the hit TV series, to participate in the festivities. It was the first time the stars had ever visited the country.

It is not an understatement to say that “Gossip Girl” is insanely popular in China, where countless fans watch episodes via pirated DVDs sold on the street or online video Web sites. Masses of young Chinese women swarmed the new two-story, 5,800-square-foot Harry Winston flagship, which was designed by New York architect William Sofield of Studio Sofield and is located in Xintiandi, a high-end shopping district, to see the actors during a ribbon-cutting ceremony Friday afternoon.

It was a scene of utter chaos.

Barricades surrounding the store almost collapsed as a wave of women screaming “Chuck! Blair! Chuck! Blair!” heaved in towards Westwick and Meester when they appeared outside. During the middle of the ceremony, a district police chief walked up to Frédéric de Narp, president and chief executive officer of Harry Winston Inc., and warned him that, if things got much more out of control, authorities would come and shut the whole thing down. Shortly after the event, rumors spread on Chinese microblogs that the “Gossip Girl” stars had caused traffic accidents.

In the flagship after the ceremony, de Narp seemed slightly shell-shocked. “And now imagine how this is all spreading online on Chinese social media,” he said.

He was right. Within half an hour of the event, photos and comments about Westwick, Meester and Harry Winston had been forwarded thousands of time on Sina Weibo, which is China’s top microblog. In February, the jeweler opened its own branded account on Sina’s microblog, which now has around 30,000 subscribers.

De Narp is adamant that Harry Winston is not trying to “democratize” luxury on the Mainland. The brand has had an almost secretive presence here for four years with a by-appointment-only boutique in Beijing in the Peninsula Hotel. In January, it opened a small store in the Peninsula in Shanghai. The executive said there are plans to open a location in Hangzhou next year as well as a select number of other second-tier cities. During the next four years, Harry Winston will grow its retail presence from its current 24 stores to 50 locations globally.

It is clear, however, that Harry Winston is trying to democratize a dream, particularly for the 70 percent or so of Chinese women who, according to de Narp, do not have a diamond solitaire wedding ring. The brand is also clearly capitalizing on the intersection of various cultural, technological and social factors to plant a seed of an aspirational fantasy of diamonds, weddings and princesslike romance with these women.

Such factors include a certain infatuation with American pop culture among Chinese females who download Western movies and TV shows from the Internet. Meanwhile, microblogs have become the de facto media outlet for discussing and sharing celebrity news and gossip on the Mainland. And now, perhaps more than ever, families are pouring tens of thousands of dollars into the weddings of their sons and daughters, many of whom are only children due to the country’s one child policy, which multiplies the amount of money parents are willing to shell out.

“This is a phenomenon that is booming and becoming very, very important,” de Narp said.

Yet Harry Winston is casting a wide net on the Mainland. This was evident at the gala dinner that followed Friday afternoon’s frenzied ribbon cutting ceremony. Westwick and Meester attended; yet what was noticeably different the second go around was the presence of a slightly older and arguably more sophisticated set of Chinese women dressed in understated evening gowns and noticeably large jewels.

The dinner, held in a massive tent alongside a lake in a park nearby Xintiandi, was one of opulence and elegance. The walls of the structure were lined with small exhibits aimed at illustrating the history of Harry Winston and the evolution of its high jewelry collections, with a specific focus on pieces from Ultimate Adornments, the New York-based house’s exclusive collection of 40 one-of-a-kind diamond and platinum necklaces, bracelets, rings and earrings.

The brand has also introduced a limited edition watch collection for Shanghai, which will be featured in the flagship’s timepiece salon, which is the first designated watch gallery Harry Winston has created within one of its own stores. De Narp said the brand will increase its watch distribution business in China over the next couple of years.

The evening also featured a performance by Jay Chou, a Taiwanese musician and actor, who is a notorious heartthrob among young Chinese.