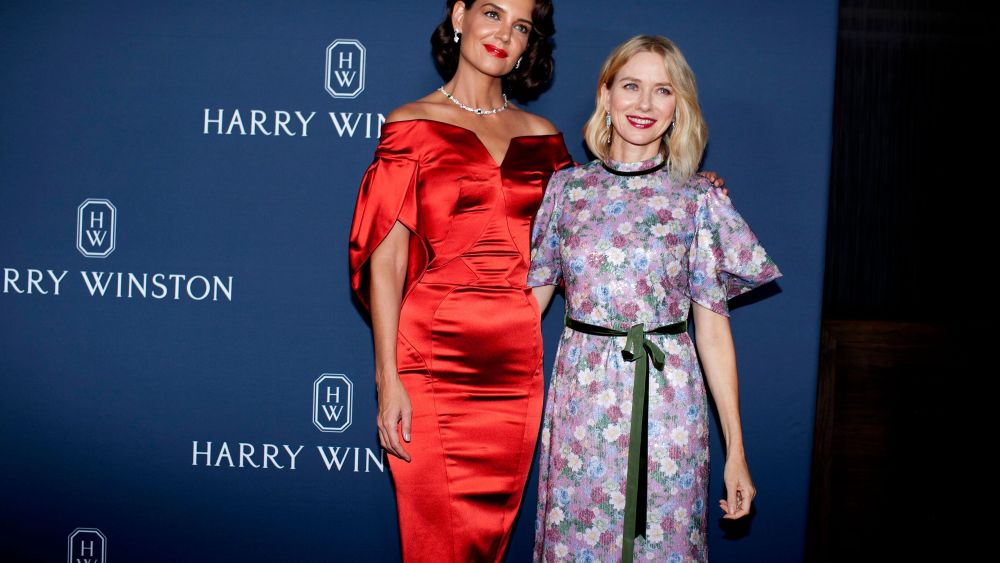 While a fair portion of the fashion set was rocking the night away to a Robbie Williams set at the Emporio Armani show in Milan, Harry Winston offered up a very New York night for those left in town.

Celebrating the launch of its New York Collection, the jeweler enlisted the likes of Jennifer Hudson (who gave a surprise five-song set), Naomi Watts, Katie Holmes, influencer Camila Coelho and “Westworld” actress Angela Sarafyan for an elegant dinner inside the Rainbow Room.

The New York Collection is made up of eight subcollections named after New York references like Central Park Mosaic, Brownstone and Cathedral, a reference to St. Patrick’s Cathedral, across from which the first Harry Winston store was located. All five women wore pieces from the collection as they roamed the room during cocktail hour, taking in the rest on display.

It was the first time both Holmes and Watts had been inside the New York landmark. (The fact that she had never been before was “weird,” Holmes said.)

“It feels very grown up. I guess we’re grown up,” said Watts, seated on a mock Central Park bench, which had been installed for the evening. “The minute I walked in I went ‘Oh!’ It feels very fancy. I forget that I can move in fancy circles.”

Complimenting her Erdem dress was a diamond links bracelet of 35.52 carats. “It feels very modern, but also a bit of a throwback to the Seventies,” she said, motioning to the bracelet. “And these earrings are supposed to be the Central Park mosaic and are supposed to represent landmarks in the city. I love that [Harry Winston] has these connections to the city and it remained his source of inspiration. And looking out the window it’s the perfect place, right?”

Being loaned fancy jewels is par for the course for any Hollywood actress, though it still gets rather nerve-wracking from time to time.

“I’m like ‘take it, take it.’ I don’t want to spend an extra hour in it than I need to because I’m so scared that something will happen to it on my watch,” Watts said.

Her fall will be spent “hunkering down” in New York getting her kids through school, she said, though she does have a vacation on the horizon.

“I’m actually headed out of town next week for a bit of a personal break. I’m going to Morocco, I’ve been before, but it will be fun to go back with a bunch of friends,” Watts said.

“It’s very glamorous,” Holmes, wearing Zac Posen, said of her surroundings. “Whenever I wear something this special it all stands out. I feel very lucky that I’m in the industry and even get to try these things on.”

She was even getting a little research done along the way. She’ll begin shooting her second film as a director next spring, called “Rare Objects,” which is set in the Thirties in New York. “So this is very inspiring. And Harry Winston started in 1932, right? So it’s fun to be here,” she said.

Perhaps no one loved the night as much as the, shall we say, more seasoned members of the crowd — all Harry Winston clients — who were on their feet with gusto following the main course, dancing for Ms. Hudson.