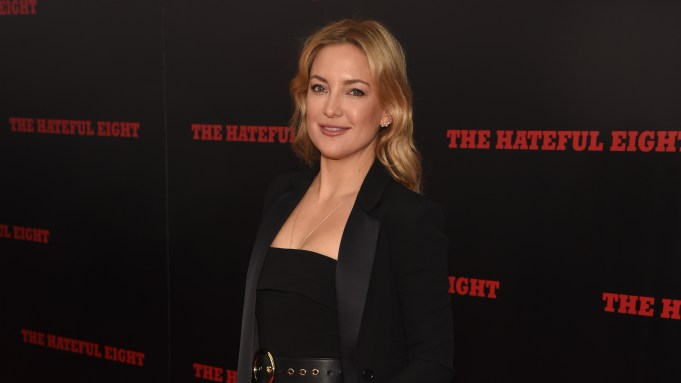 It might not be a feel-good holiday tale, but at least “The Hateful Eight” is delivering a white Christmas. Quentin Tarantino’s latest effort, out Christmas Day, features a heavy dose of snow via a blizzardy post-Civil War Wyoming. That said, it’s a Quentin Tarantino film, so it’s all but certain that the snow will be blood-spattered.

“I don’t think anybody can ever watch a Quentin Tarantino movie and enjoy it as much as he does,” said Russell, who came out to the premiere with wife Goldie Hawn and daughter Kate Hudson, who breezed down the red carpet moments earlier. “He just cherishes the process of making movies, working with actors, of putting something together for an audience to bite into and have a blast with.” Dern echoed the sentiment. “He gives you a chance to get better. He gives you a chance to be excited every single shot.”

Despite soaring praise from his cast, Tarantino’s biggest fan might just be the less glamorous Eastman Kodak. Adamant about shooting on traditional celluloid film, he’s in a small camp of high-profile directors who have helped to pull the company out of bankruptcy. Furthering his reverence for cinematic heritage, “The Hateful Eight” is also being released in a limited widescreen “Roadshow” theatrical format, complete with orchestra overture, booklet and intermission. The format peaked in the first half of the 1900s.

“It’s cool, all right?” the fast-talking Tarantino responded, defending the format to inquiring press. “You can go and see a movie, and then go to the mall and forget what you saw by the time you get to the car. In this case, it’s a big deal. It’s what movies are about.”