Everyone from Harrison Ford to Jon Hamm joined in the post-show action. 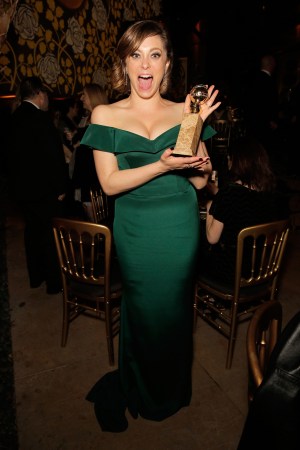 Vince Vaughn, Rachel McAdams, Viola Davis, Harrison Ford, Maggie Gyllenhaal, Jon Hamm and Julia Louis Dreyfus were among the stars who kept the party going after the Golden Globes at HBO’s annual post-show bash. Per tradition, the soiree took over The Beverly Hilton Hotel’s Circa 55 restaurant and Trader Vic’s bar where over 1,200 guests gathered for “A Winter Garden”-themed fete featuring a gold, black and cream floral design with Gothic-style conservatory filled with orchids, roses and tropical plants.

“Game of Thrones” may not have taken home the prize for Best Dramatic TV Series, but its star Emilia Clarke still came prepared to party. “This is actually my second dress,” she said, having switched into a new look. “My first dress had a train that was, like, lethal for myself and anyone around me, so I decided to change. The Valentino I wore earlier was definitely worth it, but now I’m going to be moving, so I need my legs.”

“That’s because Amy is such a good kisser,” retorted Brownstein.

When asked how they were enjoying their night, Gaby Hoffmann kept up the comedy routine.

“I was just saying what a relief it is that Hollywood finally gets a night to acknowledge itself,” she cracked. “It’s always about the teachers and the activists, the nurses. Finally a night where we can just look at each other and say, ‘You’re amazing. Thank you for doing what you do.’ Let’s face it — we don’t get paid enough, nobody pays attention to us.”

Soon, Best Actress in a Comedy Series winner Rachel Bloom swooped in. “It’s a serious workout!” she said, clutching her Golden Globe as she made her way inside. “Have you held this? It’s surprisingly heavy. Hold it!” She insisted each reporter grip it in order to emphasize her point. The actress said the night was still young as she planned to hit a few more parties including United Talent Agency’s. “My agent saw me and he kinda knows how to get me. He’s like, ‘We’ve got pasta and chicken piccata starting at 11 p.m.,’ and I was like, ‘Done.’”