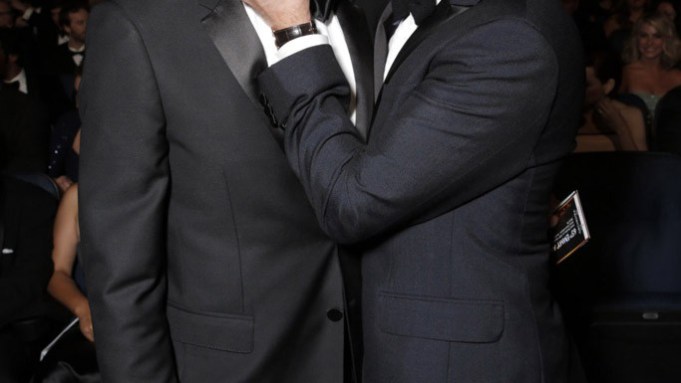 After sitting through a three-hour show and a few hours of arrivals before that, many an Emmy attendee was understandably famished. So first stop on the Sunday night post-ceremony party circuit: The Governor’s Ball, held across the street from the awards at the Los Angeles Convention Center.

“Gotta find our table. Gotta eat,” Bryan Cranston told fans who tried to stop him every few feet for photos. There were some impressive visuals at the party, which seated more than 3,800 for dinner. A glowing blue and green fiber-optic garden hung down from a ceiling. Dancers positioned in the rafters and behind a giant scrim added to the enchanted-forest vibe. In the center of the huge hall, a string quartet perched atop a multitier stage played pop standards. The effect was strangely dance-inducing, particularly for “Trophy Wife” actress Malin Akerman, who held out her glass with a hearty “Yes, please!” as the waiter approached with a bottle of wine. She then jumped up to shimmy and say hello to Jimmy Kimmel. At the “Big Bang Theory” table, Best Actor winner Jim Parsons passed his statuette around to an admiring crowd. “Keep it warm for me,” he kidded as Melissa Rauch made a beeline for her cast mates. A few more paces in, Jane Lynch could be found tucking into her beet salad solo while fans walked by calling, “We love you, Jane!” While winners schmoozed and ate, their Emmy statues received nameplates at an engraving station in the back of the hall. “Most people don’t know that they’re holding nameless Emmys in all the photos,” a staffer said.
Shortly before 10 p.m., some beat an exit for the network post-parties. “I’m sorry, she’s got to get to her car,” said Julia Louis-Dreyfus’ publicist to friends as they were heading out a side door, en route to HBO’s fete. Others planned to hit the AMC, Fox and Netflix bashes. Sofia Vergara was overheard in the limo line saying, “We go to all of it.”
HBO’s elaborate after parties are known for two things: over-the-top decor and a star-studded crowd. This year was no exception. Attendees soaked in the groovy scene at the Pacific Design Center’s fountain plaza where walls, tables and lanterns were emblazoned with an abstract peacock-feather design. “It’s a hodgepodge garage of wild Sixties-ness,” said early arrival Patricia Arquette, as she made her way down the spiraled blue and green carpet.
But few were focused on decor once Michael Douglas and Matt Damon swooped in to celebrate “Behind the Candelabra’s” big win. “It was fast, furious and glamorous,” the Liberace biopic’s costume designer Ellen Mirojnick said of custom making 120 costumes for the duo after pulling inspiration from the Liberace Foundation archives. Naturally, Douglas and Damon opted for more traditional tuxes for the night’s festivities.

RELATED STORY: On the Red Carpet at the 65th Annual Primetime Emmy Awards >>
Elsewhere, “Scandal” costars Kerry Washington and Tony Goldwyn traded compliments. “You look so beautiful,” Goldwyn told Washington.
After a long show, most went straight for the Wolfgang Puck cuisine which included chilled Maine lobster and salted caramel pecan brownie tarts. Others hit the bar. “We’re going to party hard tonight,” said “The Newsroom” cast member Thomas Sadoski. “Fortunately, we don’t have to work tomorrow. We’re on hiatus.”
As if on cue, costar Jeff Daniels walked in — clutching his award for Best Actor. “I’ve had some good [opportunities], but to have Aaron Sorkin tailoring a role for you like a suit — episode after episode? I told him, ‘I’ll do anything. Challenge me. I’m fearless.’ That’s why I hope we get to do it for years. I want him to use and abuse me,” he said, before catching up with his bespectacled costar Jane Fonda. As for who he hoped to meet? “If Elton John comes, I will weep openly.” The Rocket Man didn’t attend, but Mick Jagger did sneak in through a side entrance and sat at a booth bantering with Mel Brooks and Laura Dern.
Vergara made a late appearance — walking in hand in hand with her fiancé Nick Loeb as the party was winding down. For some, like “Game of Thrones” star Emilia Clarke, all good things would have to come to an end. “I came in from Belfast. My jet lag may force me to return home earlier than I would like,” she lamented. Akerman, still going strong, had other plans: “I’m staying out as late as I like because daddy’s taking care of baby tonight.”