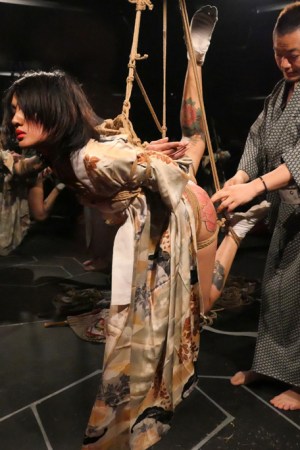 “There’s a little bit of fascination in the East for the Western World,” he added, hinting at the inspiration for his upcoming collection for Kenzo, which will show Tuesday in Paris’ Salle Wagram.

“We are just three friends who love sake,” continued Russo, who also founded Villa Eugénie, which produces shows for Nina Ricci and Kenzo, among other labels.

A kinbaku performance was held every half-an-hour.

“It’s a 17th-century Japanese artistic form of rope bondage,” explained Eymère, who’s also managing director of Editions Jalou, the publisher of L’Officiel. “It was picked up by the kabuki theater.”

“I am in Paris just to have fun,” said male model of the moment Michael Lockley, who planned to attend shows including Haider Ackermann and Saint Laurent.

“I have been on the fashion week marathon,” said Anna Cleveland, rocking the dance floor to tunes mixed by Virgil Abloh and Solomun in a vaporous Vionnet dress. She was once again on fire after going up in smoke, literally, at the Moschino show in Milan.

“There were some precautions [taken], so everything went fine,” she divulged.

Mariacarla Boscono was all set to walk for Givenchy on Sunday. She was in town sans famille. “I have a three-year-old girl. It’s a lot of work. She’s skiing right now, with her dad,” continued the model.

Accessories designer Noor Fares, who typically shows her collection in March and in September, skipped this season. “I prefer to present during couture,” she explained. “I do the Vegas show, as well.”

Jean-Pierre Marois, owner of Les Bains, said the Paris nightclub has teamed up with Closed denim on limited-edition jeans for men and women using Cone Mills fabric called 1978. He said the year marks the birth of both Closed and Les Bains Douches.

The jeans are to be launched during a “Disco Inferno”-themed party at the club on Saturday night. Les Bains is also hosting a bash on March 18 for the release of Grace Jones’ memoirs in France.