The model's 14th-annual Halloween party did not disappoint. 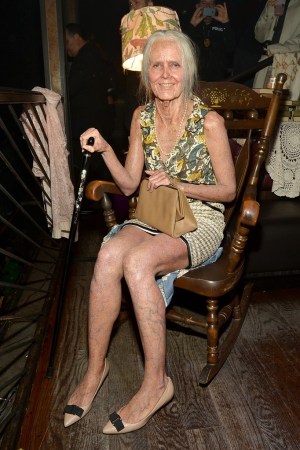 Among all the Halloween soirees in New York, Heidi Klum’s annual bashes are arguably some of the most elaborate. Her 14th-annual Halloween party, presented by Shutterfly and held at Marquee New York on Thursday night, did not disappoint.

Her verve for the holiday is well-documented, and Klum was virtually unrecognizable. She emerged from a silver Rolls-Royce dissembled as an elderly woman, the look completed with full-body makeup, faux varicose veins and a cane. She hobbled down the carpet, befuddling reporters and photographers who questioned who it was.

“It didn’t take a long time at all,” Klum cracked of her transformation, describing her preparation for the evening. “I’m wearing my old Chanel suit, I put on my dancing shoes and I was ready to go.”

Waving her cane at photographers, Klum posed for pictures with former “Project Runway” contestants before darting into the haunted asylum-themed party, which was sponsored by Svedka Vodka and Smartwater and DJ’d by Questlove.

Other costumed revelers followed, including model Lindsay Ellingson, who came as Sandy from “Grease,” and Bethenny Frankel, who stunned as Marilyn Monroe. Keren Craig and Georgina Chapman, Dan and Dean Caten and Jessica White also made an appearance.